Over Giuliani's 'Dead Body' Will Trump Meet With Mueller 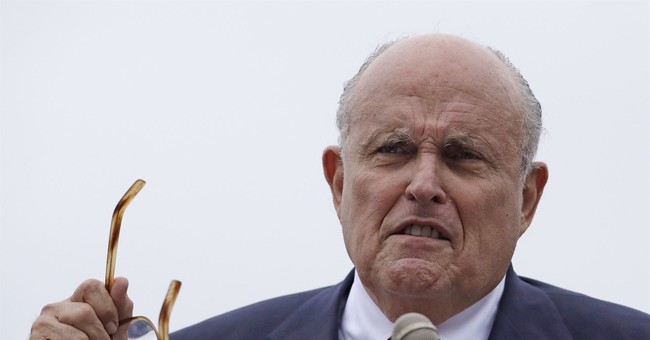 President Trump will meet with Robert Mueller over Rudy Giuliani's "dead body." Since becoming Trump's lawyer, Giuliani has provided Trump the consistent and urgent counsel to avoid sitting down with the special counsel as he leads an investigation into Russian collusion. To do so would be asking for trouble. It's a "perjury trap" waiting to happen.

He is keeping his client far from Mueller, especially after witnessing what happened to former national security adviser Michael Flynn, who finds out his fate on Tuesday for lying to the FBI about his Russian contacts.

"Yeah, good luck, good luck — after what they did to Flynn, the way they trapped him into perjury, and no sentence for him," Giuliani said in an interview with Fox News's Chris Wallace. "Over my dead body. But, you know, I could be dead."

Instead, Trump has kept his distance by providing written answers to Mueller's team, a decision commended by Harvard lawyer Alan Dershowitz as "the right tactical decision."

In his Fox interview, Giuliani also minimized the supposed hush payments former Trump lawyer Michael Cohen made to Stormy Daniels and Karen McDougal, essentially calling the potential campaign finance violations non-issues. He insisted that Trump did not initially know about the payments and called Cohen a liar, especially after he secretly recorded Trump. The president called him a "rat."

Giuliani and Trump associates say the Mueller investigation is wrapping up soon, but other analysts see it stretching for months - ending March at the earliest. Former Trump campaign chairman Paul Manafort's sentencing is not scheduled until February and March and witnesses continue to come before the grand jury, Paula Reid noted on CBS.

"Anyone suggests that this is wrapping up, that's just not true," she said.

Once it finally concludes, Dershowitz predicted that it will have found "political sins," but not crimes. Prosecutors "are supposed to find only crimes," Dershowitz noted.