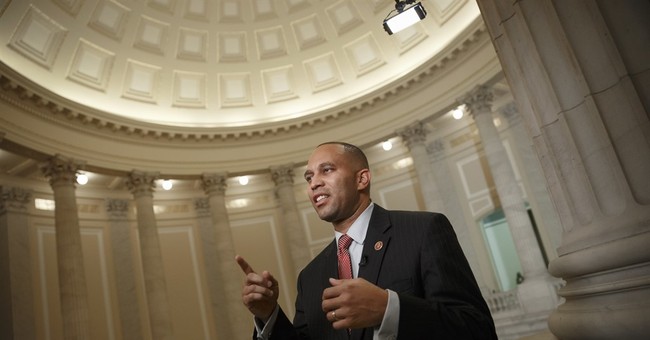 But Jeffries wasn't exactly a unanimous choice. In the end the New Yorker defeated Rep. Barbara Lee (D-CA) by just 10 votes. Some House Democrats say their colleagues flipped their votes at the last minute. Rep. Jackie Speier (D-CA) reportedly cited ageism and sexism as the reasons.

Fellow Bay Area @RepSpeier: Barbara Lee “had the votes and some people flipped.” Speier calls for open, public leadership elections in the future so members can’t pledge their vote to candidate then flip flop. Speier says there may have been ageism and sexism involved

“I feel some disappointment only with the institutional barriers that I recognize that were out here during this campaign,” Lee agreed in an interview with the Washington Post. “I’m really disappointed in that.”

"Lee’s loss is jarring, and not only because women of color earned so many Democratic victories on Election Night. At a time when the party’s base seems ready to turn left, House members seem reluctant to follow suit. Lee’s progressive politics are still further afield than many intend to go."

Yet, as some astute social media users observed, the Democrats did just renominate Nancy Pelosi, the 78-year-old veteran representative, for speaker of the House.

The media may be referring to Jeffries as a moderate, but RNC Chairwoman Ronna McDaniel has evidence to prove Jeffries is one of the more "radical" members of Congress.

Rep. Hakeem Jeffries has:
*called @realDonaldTrump voters ‘racist’
*implied the president is a KKK member
*said Jim Crow’s ‘nieces and nephews’ are in the White House

If there were any doubt about how radical House Dems will be, they just elected Jeffries to be Caucus Chair.