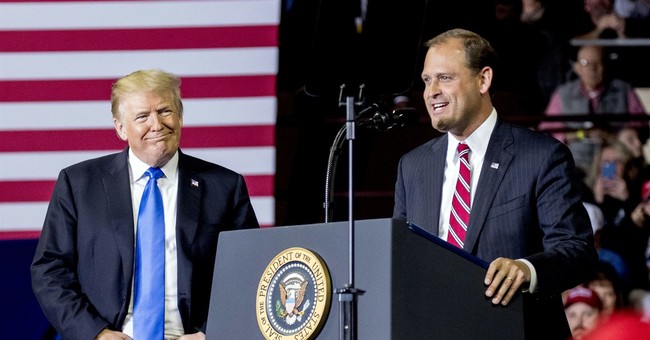 U.S Rep. Andy Barr, and Republicans, can breathe a sigh of relief. For now. The incumbent has held off Democratic congressional candidate Amy McGrath in Kentucky’s sixth congressional district race, according to NBC.

NBC News considers this race one of the bellwethers that will determine House control.https://t.co/TBTqZmzSm4

Barr was elected to Congress in 2012 and is a member of the Financial Services Committee. One of his biggest accomplishments, which he lists on his campaign site, was establishing the Sixth District Veterans Coalition, and fighting for reforms at the Veterans Affairs agency.

Barr was joined onstage Monday by Donald Trump Jr., who riled up the crowds by warning them not to let the “crazies” win Kentucky.

“I don’t need to bring in the president’s son to get a crowd,” she said. “People are coming and they’re coming to work.”

McGrath’s political introduction video, “Told Me,” emphasized her service as a fighter pilot. It resonated well with voters and garnered almost 2 million views.

Her campaign strategy, she explained, was knocking on doors, rather than holding rallies.

Democrats need to pick up 23 Republican seats tonight to retake control of the House.

But, for now, things are looking up for the GOP.

Andy Barr win in Kentucky is a very good sign for Republicans.