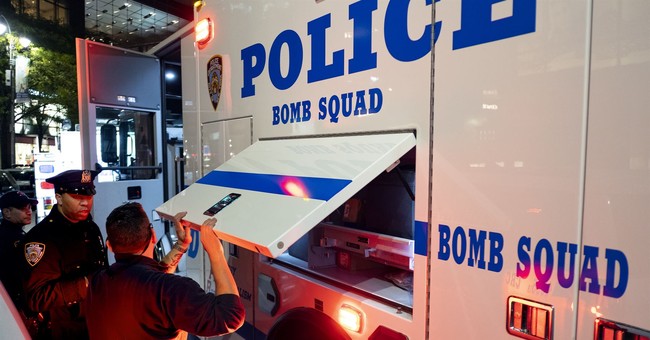 UPDATE: We have a name.

Sayoc Jr. was reported to have a criminal history.

UPDATE: President Trump will be addressing the nation soon.

I will be speaking at the Young Black Leadership Summit in 15 minutes where I will address the investigation into the bomb packages.

UPDATE: Authorities were seen covering a van believed to be owned by the suspect.

Authorities found the suspect via a cell phone, according to reports.

LATEST: Suspect in custody in connection with suspect mail-bomb campaign was tracked through a cell phone; cell phone, laptop and other electronic devices have been recovered. https://t.co/q7OJsPJ4Bl pic.twitter.com/YerSRzdaJo

Forensic evidence has led federal authorities to arrest a man in Plantation, Florida believed to be connected to the string of dangerous deliveries this week.

BREAKING: CNN's @evanperez says that Federal authorities have arrested a man in connection with the investigation into the explosives sent to political figures across the country.

The Department of Justice says to standby for a press conference this afternoon.

We can confirm one person is in custody. We will hold a press conference at the Department of Justice at 2:30pm ET.

President Trump has reportedly been briefed on the arrest. He condemned the bomb threats earlier this week at a campaign rally in Wisconsin and from the White House, where he pledged to "bring those responsible for these despicable acts to justice.”