Rep. Goodlatte Warns Rosenstein He Can Expect Subpoena Soon If He Doesn't Talk to Congress 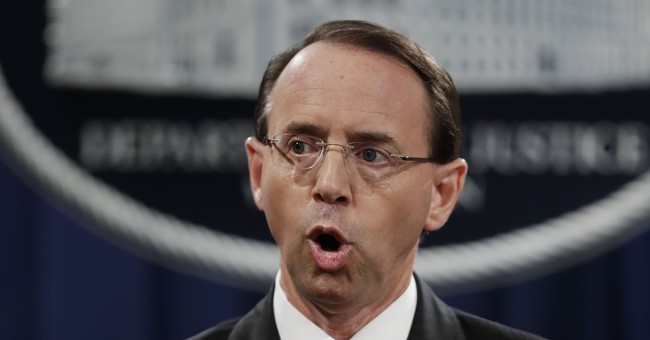 Rep. Bob Goodlatte (R-VA) is considering subpoenaing Deputy Attorney General Rod Rosenstein if he doesn't spill to Congress about that controversial New York Times report. The piece suggested that last year Rosenstein said he would secretly record President Trump in the White House and suggested they invoke the 25th amendment to remove him from office.

While traveling with Trump on Air Force One on Columbus Day, Rosenstein assured the president that his comments last year were his attempts at sarcasm, and not serious.

Whether it was a joke or not, Congress needs to hear from him.

"It’s essential that we talk to him," Goodlatte said over the weekend. "He knows that."

What Congress wants, Goodlatte explained, is a transcribed on the record interview.

"If he does not agree to do that very soon, I will issue a subpoena for him to appear," the Republican warned.

A few of Goodlatte's colleagues agreed.

“He’s got to come in and answer questions,” said Rep. Jim Jordan, R-Ohio, said on Fox News’ “Sunday Morning Futures.” “If it takes a subpoena, then that’s exactly what needs to be done.”

Rosenstein has an "obligation to be forthcoming with the president," Rep. Darrell Issa (R-CA) echoed on Fox News Monday.

Issa observed that it seems Rosenstein "doesn't want to have conversation that might lead to his recusal" in the Robert Mueller Russia probe. Attorney General Jeff Sessions already recused himself from the probe last year - a decision which President Trump publicly condemned.

If Rosenstein doesn't show up to talk to Congress, yes, "subpoena him," Issa said. If he still doesn't show, "hold him in contempt."