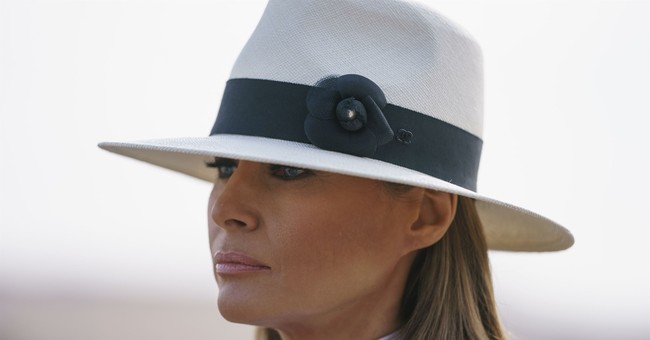 She is "one of the most private first ladies" in recent history, said ABC News Chief National Affairs Correspondent Tom Llamas before introducing his special, "Being Melania - The First Lady" on Friday night. It was Mrs. Trump's first wide-ranging interview since becoming first lady, and no question was off limits. Llamas kicked things off by asking her to define herself.

"Mother," "wife," "strong," "independent," "detail-oriented," and "staying true to herself," were just a few of the nouns and adjectives Mrs. Trump used.

As for "the worst things" she has read about herself? "Like I'm not happy in the White House, that I don't live there...I'm miserable in my marriage, that I'm out of touch. I don't know where to start."

While the TV special placed Melania in a good light, it did not do the same for her husband. Throughout the program, it was suggested that President Trump has done nothing but be a thorn in his wife's side, embarrassing her or undermining her initiatives.

Mrs. Trump chose a wildlife reserve in Kenya for the interview. It was an intriguing location, considering her husband once reportedly referred to some African nations as "sh*thole countries." In a very honest moment, Melania admitted that some organizations will not partner with her because of the rhetoric or policies emerging from the Trump administration.

Melania Trump admits to @TomLlamasABC that organizations & Foundations have turned her down when she wants to work with them because of the administration. #Trump pic.twitter.com/8S4lKxNNyJ

Her husband has also been accused of undermining her "Be Best" campaign, an anti-cyberbullying initiative. Critics call the effort hypocritical because Trump has often acted like a "bully" on Twitter.

"I don't agree always with the posts" on Twitter, she explained, "but his action is his action."

Melania said she "knew" she would be hit with the criticism, but "it will not stop her to do what is right."

Those reports Trump actually told not to go through with the initiative, however, were inaccurate.

"He didn't tell me not to do it," she said. "He understands that I want to help the next generation."

"I believe in the president's policies," she said. "We need to vigilant" with who comes into the country. However, she could not sit by while families were separated at the border.

"It was unacceptable for me to see children separated from their parents," she said. "I let him know."

Mrs. Trump added that she was "blindsided" by the child separation policy and he told him. Soon after, he signed a document ending the policy.

The president has also been criticized for condemning chain migration. Mrs. Trump said that mothers, fathers, and other relatives should be able to follow an immigrant to the U.S., as long as they vet them.

Mrs. Trump said she "of course" mentioned this to the president and "he agrees."

NEW: @FLOTUS on immigration: “I believe in the policies that my husband put together. Because I believe that we need to be very vigilant who is coming to the country, and not to do us harm.” https://t.co/rRJJVQGZNS pic.twitter.com/eBvcpcnEut

Now for the really awkward questions.

Mrs. Trump said she is "one of" the most bullied people in the world. The people writing falsehoods about her, she said, "are hiding behind keyboards."

Her fashion, for instance. Nearly everywhere she travels, the media focus on what she's wearing, as opposed to her actual initiatives. One time, though, she admits she did wear something she wanted the media to notice -that infamous jacket that said, "I don't really care. Do u?"

"It was for the left wing media who are criticizing me and I want to show them that I don't care," she explained to Llamas. "It won't stop me to do what I feel is right." Mrs. Trump said she "put it back on" after she saw how "obsessed" people were with it.

"I wish people would focus on what I do and my initiative, than what I wear."

Then, Llamas dared to ask the first lady about her husband's supposed infidelity.

"It is not a concern or focus of mine," she said. "I have much more important things to focus on."

Melania Trump says speculation about her husband’s alleged infidelities are “not a concern and focus” to her: “I’m a mother and a first lady, and I have much more important things to think about and to do.” #MelaniaTrump https://t.co/z5Dwb4saew pic.twitter.com/Gy2YoHsSw2

"I know media likes to speculate," she went on. "I understand that gossip sells newspapers...Unfortunately, we live in this kind of world today."

It's "not always pleasant" to be in this kind of limelight, "but I know what is right and what is wrong."

At the end of the segment, Mrs. Trump said her husband has "apologized" to her. But, as an aside, Llamas noted that "just yesterday" her spokeswoman Stephanie Grisham clarified that Mrs. Trump meant the president had apologized for the "media scrutiny."

The Trumps have some trust issues in the White House - and rightfully so. One senior official wrote a lengthy op-ed in the New York Times bragging that they are leading the resistance. Others have leaked sensitive information to the press.

Mrs. Trump says "yes," there are still people in the White House who the president cannot trust.

The uncertainty "makes it hard to govern," she added. "You always need to watch your back."

Still, despite all the scandal, media criticism and bullying, Mrs. Trump is happy to be at 1600 Penn.

"I believe that my husband is doing an incredible job," Mrs. Trump said.

"I don't feel like a prisoner," she insisted. "I'm enjoying it."