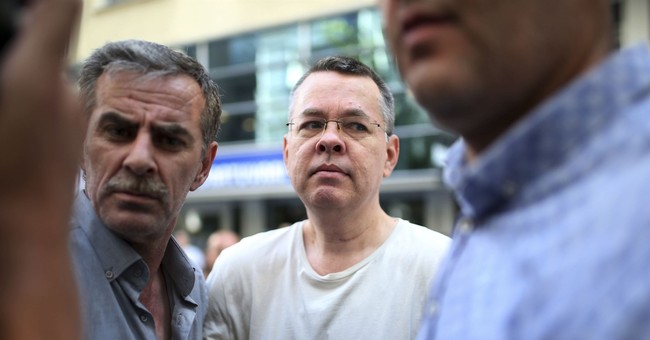 UPDATE: The Trump administration is celebrating. The president chose all caps for his latest message - pretty justifiably.

Pastor Andrew Brunson is coming home! Thanks to the strong leadership of @POTUS Trump and the steadfast prayers of millions of Americans, this innocent man of faith will soon be home!

A Turkish court has declared Pastor Andrew Brunson guilty on a "terror charge," but he is being released from house arrest after two years and it seems he'll be coming home. President Trump and Vice President Mike Pence were instrumental in the good news.

My thoughts and prayers are with Pastor Brunson, and we hope to have him safely back home soon!

Brunson was arrested in Turkey in October 2016 and was accused of having connections to Kurdish militants and plotting a coup against President Recep Tayyip Erdogan. He is a native of North Carolina, but had been living in Turkey for the past 23 years with his wife and three children.

While Brunson was detained, the Trump administration made sure Turkey knew the U.S. meant business by imposing tariffs on Turkish imports and slapping financial sanctions on the country, putting a noticeable dent on the Turkish economy. Brunson's release will likely improve relations between the two NATO allies once again.

In an interview with Fox News, Sen. Jeanne Shaheen (D-NH) noted this is a bipartisan issue everyone should celebrate. She offered the Trump administration "props" for their coordinated effort to bring Brunson home.