Report: Dina Powell OUT of Contention for UN Ambassador 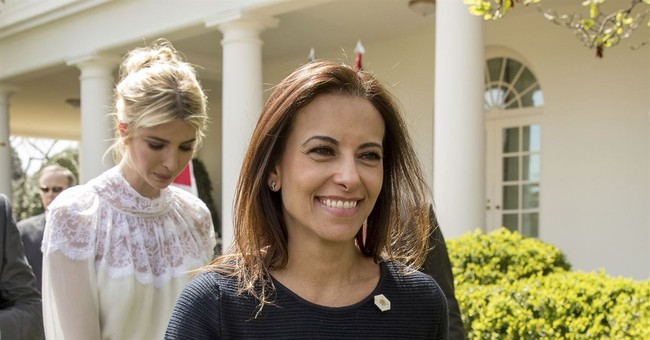 Dina Powell, former deputy national security advisor for the Trump White House, is reportedly out of the running to be our new U.S. ambassador to the United Nations. Nikki Haley shocked the country on Tuesday by announcing her plans to leave her post in the next few months. Powell's name was one of the first to be floated as Haley's successor. Yet, on Thursday, she withdrew her name from consideration and has decided to stay at Goldman Sachs, where she is an executive, a senior administration official told Reuters.

That may be welcome news for some Trump employees. "There had been some resistance in the White House to Powell’s return," according to Reuters. When Powell still served in the Trump administration, she was criticized for her supposedly "globalist" views.

Powell at times has drawn criticism from some nationalists in Trump's circle. Though longtime conservative leaders have publicly vouched for her conservative credentials, Powell has been lumped into what former chief White House strategist Stephen K. Bannon dismissively calls the "globalists" - in part because of her previous job as a Goldman Sachs partner and managing director. (Chicago Tribune)

Powell is out, but some other major players are still in contention. U.S. ambassador to Germany Richard Grenell, who seems to have the most support among Trump loyalists, national security adviser John Bolton, who previously served as UN ambassador in the second Bush administration, and even First Daughter Ivanka Trump, have been mentioned as successors. President Trump suggested his daughter would be "incredible" at the UN, but complained that he'd be accused of "nepotism" if he awarded her the position.

Haley has received rave reviews for her 19-month tenure at the UN, where she has boldly defended American interests. Trump is one of her biggest fans and gave her a very warm sendoff at the White House this week. He also promised that his new pick will be fantastic.