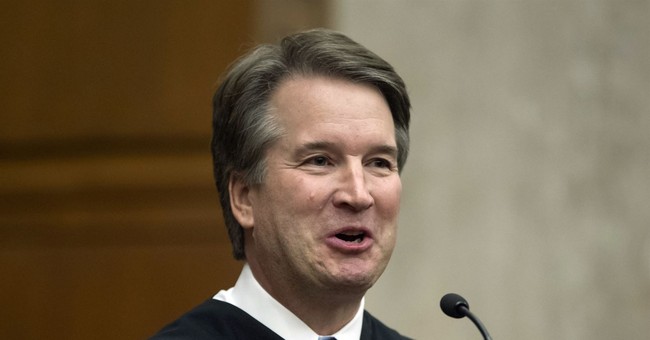 This week, the Senate gets its chance to grill President Trump's Supreme Court nominee Brett Kavanaugh as his confirmation hearings begin. Democrats will be quick to pounce, having tried to disqualify the nominee by surfacing some of his supposedly controversial writings. But, they have yet to expose any significant stains on his judicial record.

The biggest "gotcha" the opposition research folks have found on Kavanaugh's record is that he has suggested that presidents should be shielded from investigations while they're in office. Opinions like that make Democrats cringe because they interpret it to mean that as a Supreme Court justice Kavanaugh would not hold Trump to account during the Russian collusion investigation. Senate Minority Leader Chuck Schumer, who said he'd lead the charge with "everything" he's got to stop his nomination, suggested Kavanaugh would have let Richard Nixon off the hook for obstructing justice.

Former Bill Clinton lawyer Bob Bennett is a fan, however. The two met in the 1990s, when Bennett was serving as Clinton’s personal lawyer in the Paula Jones case and Kavanaugh was serving on the Office of Independent Counsel under Ken Starr. Despite their political differences, Bennett was impressed by his fellow lawyer.

"Brett’s integrity quickly won me over, and we became close friends despite our differences (and the differences between the Presidents we served)," Bennett explained.

He continued to beam about his old friend:

"Brett is the most qualified person any Republican President could possibly have nominated," Bennett wrote in his letter, which does not contain Trump's name or any direct reference to him. "Were the Senate to fail to confirm Brett, it would not only mean passing up the opportunity to confirm a great jurist, but it would also undermine civility in politics twice over: first in playing politics with such an obviously qualified nominee, and then again in losing the opportunity to put such a strong advocate for decency and civility on our Nation’s highest court."

The nominee received other bipartisan endorsements from former colleagues and acquaintances familiar with his work.

Yale Law School Professor Akhil Reed Amar wrote in the New York Times that he "strongly supported Hillary Clinton for president" in 2016, but he finds it "hard to name anyone with judicial credentials as strong as those of Judge Kavanaugh."

Jack Goldsmith, a Harvard Law Professor, called Kavanaugh an "immensely qualified" candidate, an "outstanding" lawyer and judge, "a great teacher and serious scholar of the law" and "a generous, honorable, kind person.”

Kavanaugh faces the Senate Judiciary Committee Tuesday. There are a lot of people on his side, but still RNC Chairwoman Ronna Romney McDaniel predicts it won't be a fair fight.

The American people want #JudgeKavanaugh to have a fair hearing, but half of the Democrats on the Judiciary Committee have already announced their opposition.

This is unprecedented obstruction just to please their base.