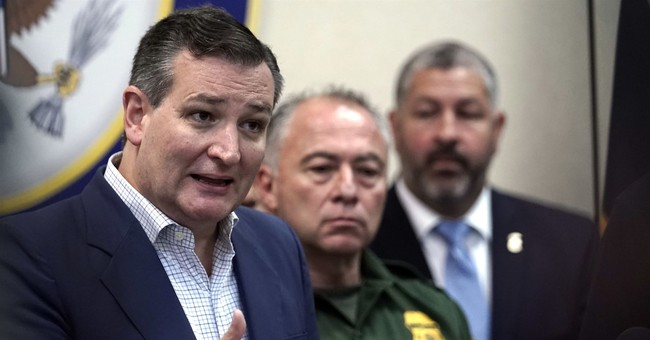 When Texas Democratic Senate candidate Beto O'Rourke was asked a question about the NFL anthem protests at a town hall last week, his answer went viral. O'Rourke told the audience that kneeling during the anthem was not disrespectful. In fact, it is patriotic, he said, because today's kneeling football players are paying homage to the heroes of the civil rights movement. He could "think of nothing more American."

‘I can think of nothing more American.’ — Beto O'Rourke — the man taking on Ted Cruz — brilliantly explains why NFL players kneeling during the anthem is not disrespectful pic.twitter.com/bEqOAYpxEL

Sen. Ted Cruz (R-TX) responded to his opponent by noting he could think of some things that were more American than the NFL protests.

While in Corpus Christi, Ted Cruz called out Beto O'Rourke for supporting NFL players taking a knee in protest. pic.twitter.com/GN1r9lbEiI

Cruz had a few other things to say Thursday after celebrities like Kevin Bacon and Lebron James chimed in to thank O'Rourke for his "thoughtful" speech.

"Beto raising big $$ from Hollywood by supporting NFL protests of the national anthem," Cruz wrote. "But in Texas?  Vast majority of Texans stand for the flag, honor our veterans, and support the brave men & women of law enforcement. People can protest without disrespecting the flag."

Most Texans stand for the flag, but Hollywood liberals are so excited that Beto is siding with NFL players protesting the national anthem that Kevin Bacon just retweeted it. That means all of us us can now win Six Degrees of Kevin Bacon! https://t.co/8oWpL1AuyF

Cruz and O'Rourke are currently separated by only 4 points leading up to the midterms, according to recent polling.