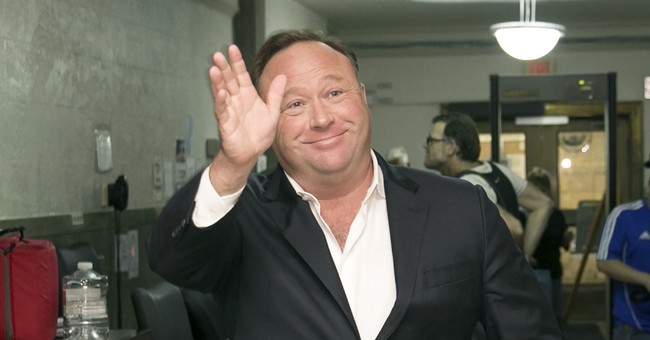 “When users violate these policies repeatedly, like our policies against hate speech and harassment or our terms prohibiting circumvention of our enforcement measures, we terminate their accounts,” YouTube explained.

Many social media users applauded the decision, noting it was high time Jones's conspiratorial rhetoric be stripped of its reach.

A HIP HIP HOORAY for these 4 companies!

A WOMP WOMP for Alex Jones and his conspiracy theories!

He’s not just a conservative.
He’s a conspiracy theorist who hurts people.

Others, though, think YouTube is setting a "dangerous precedent."

I'm not a fan of Alex Jones, but the choice to ban InfoWars sets a dangerous precedent. It's easy to use InfoWars as the example now, but what happens when this treatment is used on other outlets and journalists, and why are we trusting Facebook/YouTube to make these decisions?

The politically naïve are celebrating that powerful private telecommunication companies that have privatized & monetize speech decided people are too stupid to think for themselves & banned Alex Jones & Info wars. They don't care about Jones. But they do care about the left.

.@BenShapiro explains why despite the fact that he disagrees with Alex Jones, censoring his content is a bad idea.

Media Research Center President Brent Bozell agrees that censorship is not the answer.

“I don’t support Alex Jones and what InfoWars produces," Bozell said in a statement. "He’s not a conservative. However, banning him and his outlet is wrong. It’s not just a slippery slope, it’s a dangerous cliff that these social media companies are jumping off to satisfy CNN and other liberal outlets.”

While Sen. Ted Cruz (R-TX) has not specifically commented on the YouTube decision, we can all guess how he feels judging by how he defended Jones's right to exercise his First Amendment freedoms after Facebook's ban.

"Am no fan of Jones — among other things he has a habit of repeatedly slandering my Dad by falsely and absurdly accusing him of killing JFK — but who the hell made Facebook the arbiter of political speech?" Cruz wrote. "Free speech includes views you disagree with."

Twitter remains one of the last major platforms to take action against Jones. A spokesperson for Twitter said Infowars is not in violation of company rules, noting that replies to Jones are often filled with people rebutting what he is saying in real-time https://t.co/UL7oiacRta