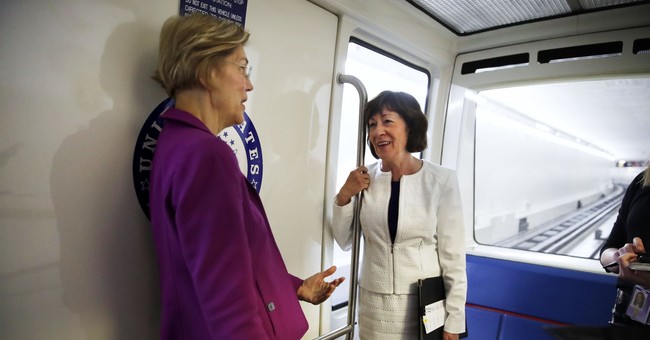 Sens. Susan Collins (R-ME) and Lisa Murkowski (R-AK) will be made to care, according to liberal activists determined to block Brett Kavanaugh's nomination to the Supreme Court. The two moderate Republicans have voted against party line in the past, including in last year's effort to repeal Obamacare, so they are obvious targets for the derail-Kavanaugh campaign.

Ezra Levin, co-founder of the progressive Indivisible Project, said his group plans to "force" the two women to vote against Kavanaugh.

He elaborated on why Collins and Murkowski are their key to success.

"I'm not saying we are guaranteed victory, but there is a path to victory," Levin explained. "It is narrow and I think you're exactly right. It's going to be through Maine and Alaska and through keeping the entire Democratic caucus together," Levin said. "Literally today there were events by Indivisible groups in Maine and Alaska, let alone in places like Texas and California and all across from sea to shining sea. This is going to be won by constituent power."

The mission has "already begun."

"Folks are energized," Levin said. "When we launched this campaign just about a week ago in order to fight this nominee, our website crashed with the number of people signing up in order to oppose this nominee. We know that this is possible if people stand up and that means on focusing on your two senators, getting them on the record. It doesn't matter if you're in a red state or a blue state or a purple state. We need leaders out there to fight this nominee and win."

Liberal activists are using aggressive rhetoric and borderline threats because they know if Kavanaugh makes it through confirmation and replaces the retiring Justice Anthony Kennedy, who had often been the swing vote, the court will tilt to the right. Some progressives are even suggesting Kavanaugh will overturn Roe v. Wade. Because Collins and Murkowski voted against the Obamacare repeal effort in part to protect Planned Parenthood, it's no wonder they are high on the liberal watch list.