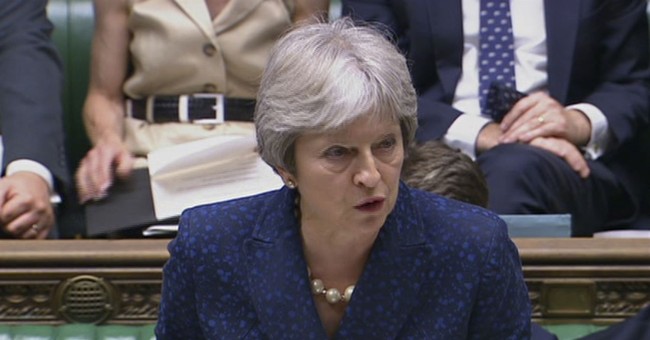 Americans have been rightfully consumed by the new Supreme Court nomination of Brett Kavanaugh this week. So, you may have missed the mess that's been brewing across the pond. British Prime Minister Theresa May is currently trying to hold her government together in the midst of protests over her handling of Brexit, the United Kingdom's exit from the European Union.

Conservatives are increasingly frustrated by May's appeasing attitude toward the European Union and the watered down version of their economic plan. David Davis, the top Brexit official, resigned, followed by Foreign Secretary Boris Johnson, one of the most recognizable figures in the pro-Brexit movement.

“It seems to me we’re giving too much away, too easily, and that’s a dangerous strategy at this time,” Davis said of the agreement made at Chequers.

In Johnson's resignation letter, he regretted that the Brexit "dream is dying, suffocated by needless self-doubt."

May said she was "sorry and a little surprised" to see him go.

The unrest had Nigel Farage suggesting Monday on Fox News that this will be May's undoing.  Her Brexit plan said "we can still save parts" of the EU, he noted. We'd still "be taking rules from elsewhere." It was "a total betrayal of what people voted for." He predicted she will be out as prime minister "in the next fortnight."

If at least 48 members of Parliament send letters to Sir Graham Brady, the chairman of the 1922 committee of backbench Conservative MPs, he would have to call a vote of no confidence.

The battle over Brexit is one reason why, when asked about the NATO summit this week, President Trump predicted Russia would be his "easiest" stop in Europe.

If they're going to throw Brexit away, Farage said, then he'll "be back."