NYT Tries to Use Pruitt's Daughter to Malign His Character...and Gets the Story Wrong 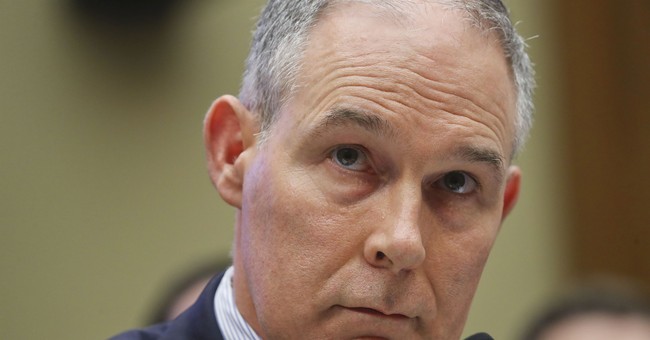 EPA Administrator Scott Pruitt has been a target on Capitol Hill the last several months on account of his travel fees, his condo deals, and reports he violated ethics rules by gaining jobs for his friends. He defended himself against these charges at a hearing before the Senate Appropriations subcommittee on the environment last month. Now, however, his daughter is in the interrogatory spotlight. The latest headlines suggest that Pruitt used his position as EPA chief to earn his daughter admission into the University of Virginia Law School. In the report, the Times suggests foul play after Pruitt got a letter of recommendation from Virginia lawmaker William Howell as his daughter was seeking a spot at the school.

It was a juicy story, but it was missing a few key details, the most important being that the university received Pruitt's daughter's recommendation well before he was working for President Trump, on Nov. 1, 2016.

Then came this massive correction.

An earlier version of this article included an item that erroneously described Scott Pruitt’s use of his position at the Environmental Protection Agency for personal matters. While a Virginia lawmaker, William Howell, said he wrote a letter of recommendation to the University of Virginia Law School on behalf of Mr. Pruitt’s daughter, McKenna, he actually wrote it while Mr. Pruitt was the attorney general of Oklahoma. After publication of the article, additional research by a legislative aide, Mr. Howell said, showed he had incorrectly stated the date of the letter, which he said was actually written on Nov. 1, 2016, more than three months before Mr. Pruitt was confirmed as E.P.A. administrator, in February 2017. The law school, which had declined to comment for the article because of privacy concerns, issued a statement on Saturday saying Ms. Pruitt had given the school permission to confirm that she had been offered early admission in late November 2016 and that the “application was evaluated according to our usual admissions procedures.” The material about Ms. Pruitt’s application has been removed from the article.

Welp. As you can see from the opening paragraph, the media has plenty of rumors and reports to piggy back off of already in terms of eyebrow raising EPA ethics, but Pruitt's daughter's education should now officially be off limits.