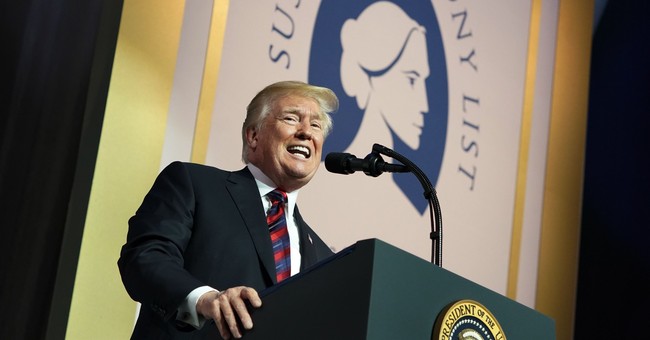 Washington, D.C. - He's "the most pro-life president in history," SBA List President Marjorie Dannenfelser said during her introduction of the president at her organization's gala Tuesday night. President Trump received such a warm welcome at the pro-life event because in his first year in office, he has done plenty to protect the unborn.

The pro-life community had reason to celebrate his presidency, Dannenfelser explained, because when it comes to life, "he is keeping his promises."

With its usual humor and tendency to veer off topic (and teleprompter), Trump's speech highlighted a few of those kept promises. On his watch, the Mexico City Policy, which prevents taxpayer money from going to overseas abortions, was reinstated. He is pushing the effort to pass the 20-week abortion ban via the Pain Capable Unborn Child Act. He has filled courts with pro-life judges. He received a standing ovation, however, when he made mention of his administration's most recent and most sweeping pro-life move to date - stripping Title X funds from clinics that perform abortions. The "Protect Life Rule" is clear in its message: abortion is not family planning.

Crowd gets on its feet again when @POTUS says his admin is prohibiting title X funding from clinics that perform abortions. #prolife #sbalistgala @SBAList pic.twitter.com/goDfA9QEWK

Trump did stray off topic a bit. Among his other musings were tax reform, reflections on the 2016 election, and several moments discussing the importance of the midterms. He stopped short of suggesting the midterms were as important as the presidential election he won though. "Who the hell wrote that line?" he asked the audience, who roared in laughter.

He returned to his pro-life agenda by sharing a story about a precious young girl who had survived an opioid dependency and invited her onstage.

.@realDonaldTrump kisses 4-year-old Katharine Alexander, who was born with an opioid dependency and was adopted by Lisa & Bruce Alexander (dad holding her) and brought up on stage at the Annual Campaign for Life Gala in Washington. pic.twitter.com/0rVFxhoOsQ

White House Counselor Kellyanne Conway received the Pro-life Distinguished Leader Award later in the evening. Trump asked her to stand before she received the accolade and be recognized by the crowd. He commended her as "a fighter" who does the shows "no one else wants to do." Trump had plenty of kind words for Rep. Steve Scalise (R-LA) too, who gave special remarks at the banquet. He's the "legend from Louisiana," Trump said, who is "probably in better shape than all of us." The event was emceed by former model and businesswoman Kathy Ireland.