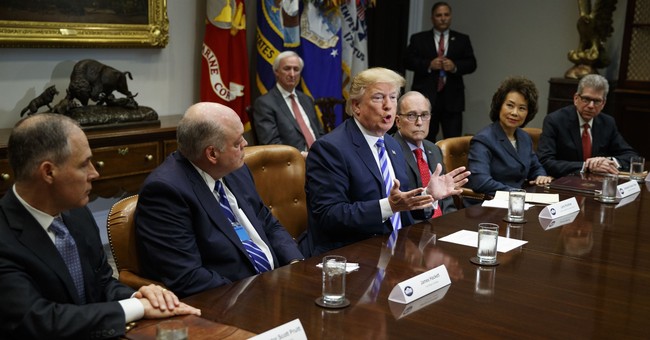 "We are getting tough on the drug makers that exploit our patent laws to choke out competition," President Trump said outside the White House Friday outlining his plan to lower prescription drug prices.

"Our patent system will reward innovation," he said. "But it will not be used as a shield to protect unfair monopolies."

The drug lobby, he continued, is making a fortune. That's why he's pushing for reform.

.@POTUS: "Under this administration, we are putting American patients first." pic.twitter.com/biLMCbA58t

"This is the most comprehensive action plan" in history, HHS Secretary Alex Azar said after Trump's remarks.

The president's blueprint is "a sophisticated approach," he added.

Everybody at HHS "is rolling up their sleeves" and getting to work on the 50 action items included in the proposal.

A couple of those items include expanding private sector negotiations for Medicare and getting drug companies to disclose their prices in their ads. That way, "consumers would have more balanced information."

Zeke Emanuel, a former healthy policy adviser for President Obama, responded immediately on CNN. He said Trump's proposal will do little to lower drug prices because "you have to confront the drug industry."

He won't do it "because his Republican colleagues don't like that idea."

You can read Trump's complete proposal here. It is one that will "put American patients first."