Will the New York Times Fix This Headline About Pompeo? 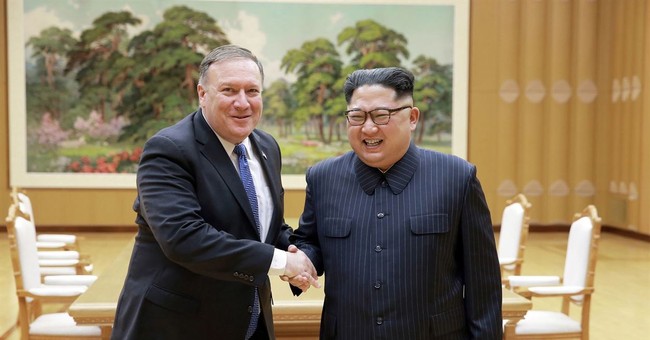 Secretary of State Mike Pompeo, we now know, made his unannounced trip to North Korea earlier this week in order to secure the release of three American hostages. It was an incredible feat of diplomacy, and the three newly freed men touched down in the States early Thursday morning.

It all makes this New York Times headline pretty regrettable.

I'd say traveling to North Korea to secure the release of 3 American prisoners of North Korea is a good thing @nytimes, no? pic.twitter.com/j5UTpEokST

In the piece, the writer suggests that Pompeo's absence during President Trump's Iran Deal announcement is reminiscent of former Secretary of State Rex Tillerson's "irrelevance."

While Pompeo could have been contacted midflight, the secretary’s "aging plane has such poor equipment that calls are often dropped midsentence," the Times made sure to note.

Of course, at the time, the editors did not know why Pompeo had hopped on a plane. The secretary of state had simply told the Times and other press that he was on his way to North Korea to prepare for upcoming summit between Trump and Kim Jong Un. For security reasons, presumably, he did not discuss the hostages.

Quite the opposite of "irrelevancy," Pompeo was en route to North Korea in lock step with the president's agenda, ready to pull off an incredible achievement for both the administration and the country.

The Times got a public rebuke from White House Press Secretary Sarah Huckabee Sanders at Wednesday's press briefing. How dare the outlet suggest Pompeo was "AWOL" when indeed he was embarking on a significant trip.

While Trump's Iran deal decision was important, I'd guess that Pompeo securing the release of American prisoners is a little more urgent than standing next to the president at the White House for a photo op.

Will the Times issue a correction?

The freed hostages, Kim Dong Chul, Kim Hak-song and Kim Sang Duk, arrived safely at Joint Base Andrews in Maryland a little after 3 a.m. on Thursday. The Trump-Kim Jong Un summit is expected to take place next month in Singapore.