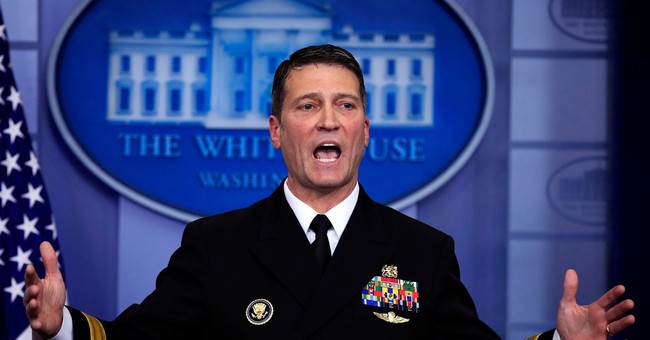 White House doctor Ronny Jackson had reportedly not been properly vetted before being named as President Trump's nominee for Veteran Affairs secretary. His Senate confirmation hearing, initially scheduled for Wednesday, has been delayed as Jackson faces new misconduct allegations, such as overprescribing medication, and creating a hostile work environment.

In light of these concerns, Senate Veterans Affairs Chairman Johnny Isakson (R-GA) has postponed the hearing. He added, though, that the allegations were still "unsubstantiated."

"Let's give the man a chance to be heard," Isakson told CNN Tuesday.

Sen. Ed Markey (D-MA) claims that Trump nominated Jackson on a "personal impulse." It's now "up to Congress" to do the vetting.

The White House, however, is still standing by their nominee.

White House stands by Adm. Ronny Jackson: "Admiral Jackson’s record of strong, decisive leadership is exactly what’s needed at the VA to ensure our veterans receive the benefits they deserve."

Jackson had been proudly chosen by Trump after the president fired David Shulkin, a holdover from the Obama administration. He previously served as the presidential physician for Presidents George W. Bush and Barack Obama.

"Admiral Jackson is highly trained and qualified and as a service member himself, he has seen firsthand the tremendous sacrifice our veterans make and has a deep appreciation for the debt our great country owes them,” Trump said at the time.