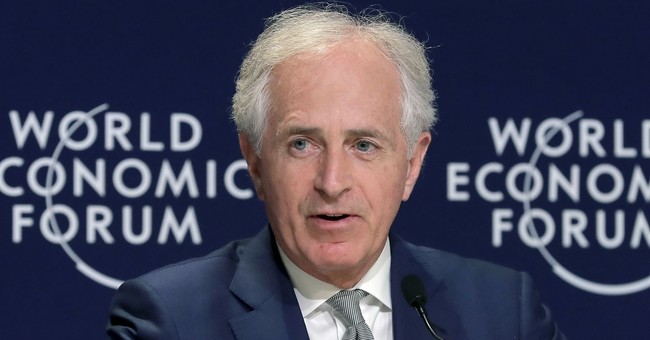 With reports this morning that Republicans are waffling on whether to support President Trump in his reelection bid, Sen. Bob Corker (R-TN) must have expected to get the question on CNN. Yet, he seemed downright unprepared to answer it.

Then, the Republican senator said he wasn't even sure whether the president was interested in running.

"Certainly CNN has not taken for face value everything that comes out of the White House," Corker said. "I have no idea whether the president runs for re-election."

Camerota was shocked by Corker's insinuation, noting that Trump himself has announced he's all in for 2020.

"I'm definitely not sure" he's going to run, Corker repeated.

When Camerota noted Trump has already raised $4 million for the effort, Corker dismissed it as "a speck of sand in the ocean."

"I want to know who else is in the field," he insisted.

Corker kept answering Camerota's questions with questions of his own.

"Would you support the Democratic candidate?" Corker demanded. It was a very awkward exchange, with Corker assuming Camerota was a Democrat.

"What makes you think" I would support that candidate? the host wondered.

Corker, you may remember, gained one of Trump's infamous nicknames last year after the senator likened his administration to an adult day care center.

Corker's wishy washy answers was a common occurrence Thursday among Republicans. Sen. Ron Johnson (WI) also told CNN it was "too early to tell" where his support would lie in 2020.

Republican Sen. Ron Johnson says it's "way too early" to say whether he'll support a re-election bid for Donald Trump in 2020, adding to a growing list of conservatives on Capitol Hill who are holding out their endorsements for their party's President https://t.co/hGSkkX7TmF pic.twitter.com/m7iaG9qfVo