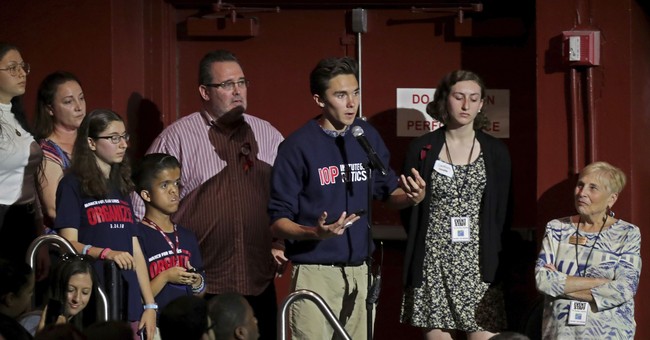 Update: Kyle reached out to Townhall on Twitter to let us know that Charlie Kirk will also be speaking in Parkland, FL on Tuesday in addition to this week's Facebook conversation.

Conservative entrepreneur Charlie Kirk was told he was not allowed to speak at Marjory Stoneman Douglas high school this week because "non-school sponsored" events were not allowed on campus. That's a shame, Kirk said, because his message was not a sinister one.

"My mission would not have been to offend," he told "Fox & Friends." "I did not want to make anyone feel uncomfortable, but instead, here’s what really troubles me. Ever since that horrific shooting, the national conversation predominately from students from that school has been about gun confiscation about taking people’s guns away."

Conservative MSD student Kyle Kashuv, who had organized Kirk's appearance at the school, was frustrated by the dismissal. He also couldn't help but notice the administration has no issue with a school walkout scheduled for Friday, organized by none other than David Hogg.

Apparently, according to people at my school, Fridays school walkouts were approved by the school board - the same school board that blocked @charliekirk11 from coming and said they're not letting MSD get political on campus. ??

As he's already proven with his willingness to take action on Capitol Hill on efforts to prevent mass shootings, Kashuv did more than talk about a solution. He offered one to Kirk. Instead of the previously scheduled speech on campus, Kashuv invited Kirk to lend his voice to a Facebook livestream. He confirmed Monday that Kirk is in.

I am working on having 4 prominent speakers, one every 15 minutes, go live on Facebook at 10:00 AM-11:00 AM on Friday, to discuss ways to save lives without infringing on 2A and the importance of mental health and not bullying.

Despite the chaos over his visit - reminiscent on too many college campuses today who are closed minded when it comes to conservative viewpoints - Kirk remained optimistic.

.@charliekirk11: "Despite all the horror that's happening on our college campuses, I've never been more optimistic about the future of this country." pic.twitter.com/K0ymZFjVhK