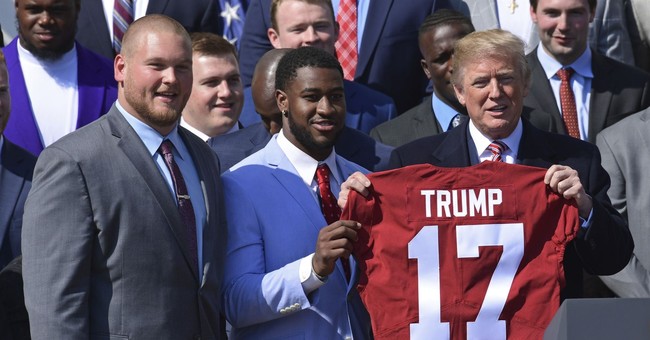 The Crimson Tide beat Georgia 26-23 to win their fifth national title in nine years in January. The president heralded the team's second half comeback as "one of the greatest victories ever." Trump was in attendance only for the first half.

“In the national championship game, you stuck to ‘The Process,’ even when it was looking pretty tough,” the president said on the White House lawn. “I was watching. I said, ‘Coach, not looking too good.’ Down 13-to-nothing at halftime to a great Georgia team, these champions fought back as they did all season long. And they kept fighting and fighting.”

During the ceremony with head coach Nick Saban and the players, Alabama punter JK Scott asked Trump to bow his head in prayer with the team. He complied.

Alabama punter JK Scott asked President Trump if he could pray with him during the Alabama football team visit today at the White House. pic.twitter.com/sev0yCobX8

Ahead of the team's visit, Saban reportedly warned his players against protesting or boycotting the White House like the Golden State Warriors NBA team did. Infuriated with the Warriors' response, Trump disinvited them.

He faced a much friendlier crowd in the Crimson Tide.