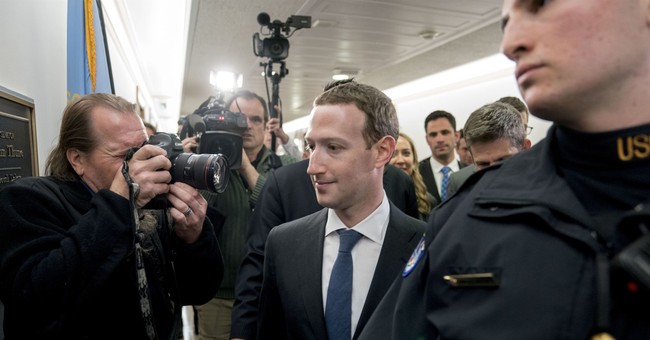 Facebook CEO Mark Zuckerberg testified on Capitol Hill Tuesday before a joint committee hearing to answer questions about privacy concerns that have dogged his company. It was a full room. Dozens of cameras perched themselves in front of the entrepreneur and forty senators from the judiciary and commerce committees grilled him on the data mining scandal that compromised millions of Facebook users' privacy.

The political data firm, Cambridge Analytica, we've come to find, improperly collected data on over 87 million users. The senators wanted Zuckerberg to assure them that outside third parties won't have the ability to spy on users. How will the company protect users' data?

Facebook is currently “getting to the bottom” of what Cambridge Analytica did and investigating tens of thousands of apps, Zuckerberg said. The company is conducting "full audits" on any suspicious apps and banning people who have violated their privacy policies.

They are taking a more “proactive” role in this.

Still, senators like Bill Nelson (D-FL) wanted to know why Facebook did not notify its users that their information had been compromised. Didn't they deserve to know?

Well, Zuckerberg explained, Cambridge Analytica had assured them at the time that they had deleted the users' data.

"We considered it a closed case," the CEO said. "We shouldn’t have taken their word for it."

Asked by Nelson if anybody at least notified the Federal Trade Commission, Zuckerberg said no, for the same reason.

Facebook COO Sheryl Sandberg was grilled on a smaller scale about the data breach on the "TODAY" Show last week and gave Savannah Guthrie the same answers. Why did Facebook continue to trust Cambridge Analytica after they had clearly violated company policies, the anchor wondered.

"We had legal assurances from them that they deleted it," Sandberg explained. "What we didn't do is the next step of an audit and we're trying to do that now.”

Zuckerberg maintained at today's hearing that Facebook is “an idealistic and optimistic company.” On Wednesday, he will appear before the House Energy and Commerce Committee.