Some Parkland Students Say Increased Security Measures Are Too Much 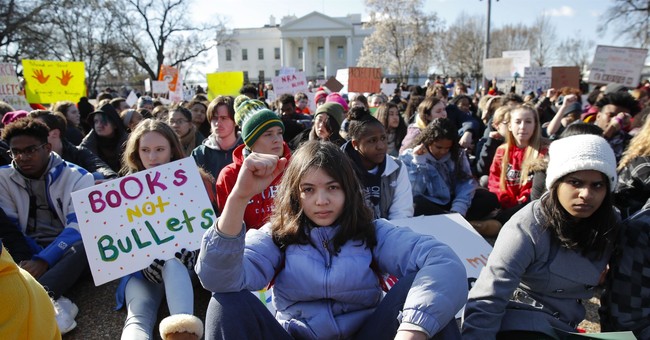 Marjory Stoneman Douglas High School is struggling to balance new security measures and student privacy in the wake of February's mass shooting. While Parkland students want to feel safe at school, they are bemoaning the cumbersome steps they must now go through each morning on their way to class. Monday marks their first day back after the March for Our Lives rally in Washington, D.C., which was organized by many of the students.

David Hogg, now one of the most recognizable faces in the gun control movement, says being forced to wear clear backpacks is a violation of privacy.

“Many students want their privacy,” Hogg explained at a forum with Axios’ Mike Allen. “There are many females at our school, when they go through their menstrual cycle, they don’t want people to see their tampons and stuff.”

He continued, noting that he and his peers are essentially having their "First Amendment rights infringed upon."

"It’s unnecessary, it’s embarrassing for a lot of the students, and it makes them feel isolated from the rest of American school culture," he said.

Of course, Hogg's critics would respond by noting he is trying to infringe on their Second Amendment rights. Hogg said at the March for Our Lives rally last weekend those arguments unfairly misconstrue his narrative. As he's often noted, his dad is a former FBI agent and they have guns in their home.

It's important context, but he and other students have indicated support for a new ban on "assault weapons" like the AR-15, the gun used by the Parkland murderer Nikolas Cruz to kill 17 people. Gun rights activists say that has already proven to be ineffective.

Sophomore Daniel Bishop agreed with Hogg in that the clear backpacks amount to "an invasion of privacy." However, he'd be open to metal detectors.

Another Parkland student, Isabelle Robinson, said school is about to be "so much worse" because of the additional security measures, which also include the need to wear new school IDs.

Instead of implementing the clear backpack rule, "we should have more policies to make sure these students are feeling safe," Hogg offered.

Well, Congress has introduced new policies, at which Hogg and several of his classmates scoffed. Yes, the STOP School Violence Act increases security at schools and improves communication between schools and local law enforcement, but it is “pathetic” because it does not mention the word “gun,” Hogg's classmate Cameron Kasky has noted.

No bill is going to be perfect and cannot stop every shooting. But, shouldn't we cheer any bipartisan step forward?

Thirteen of the 17 Parkland victims' families are supporting the STOP School Violence Act.