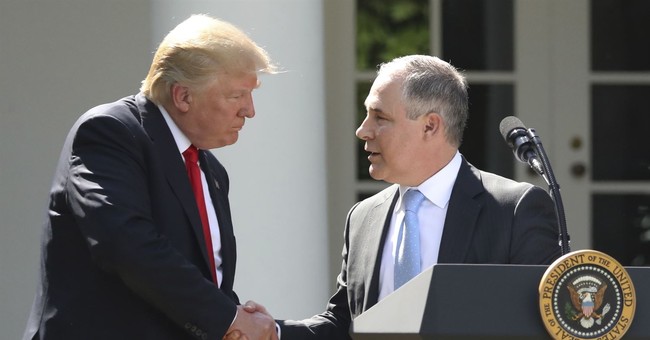 Gov. Chris Christie doesn't know how EPA Administrator Scott Pruitt can survive in his role following another round of rumors about his potential ethics violations. If his prediction proves true, Pruitt would be the latest in a string of travel-related scandals for Trump's cabinet, including Treasury Secretary Steven Mnuchin, fired VA Secretary David Shulkin and former HHS Secretary Tom Price.

Recent reports indicated that Pruitt's trip to Italy last June cost $120,000, partly because of a military flight he took on one leg of his trip to Rome. He defended the trip because it gave him a chance to tell other nations about the U.S.'s decision to pull out of the Paris climate agreement. He also received criticism for often flying first class, but he cited security reasons for those upgrades.

"I’m a little bit dumbfounded by the kind of media narratives that these things are somehow not the focus," he said last month.

Pruitt may need to find another excuse because we now have reason to believe that he rented a condo on Capitol Hill from a lobbyist for which he paid only $50 a day. The landlord, Vicki Hart, is the wife of Steven Hart, a Washington lobbyist whose firm represents a number of fossil fuel companies. Pruitt lived there from February to July of last year.

That has to be the last straw, according to Gov. Christie.

"The president's been ill-served by this, and if Mr. Pruitt's going to go, it's because he should have never been there in the first place," said Christie. He added that the Trump transition was "brutally unprofessional" from the very beginning.

"This was a transition that didn't vet people for this type of judgment issues, which I think could have been seen very easily in a lot of these people," he added.

When asked if Pruitt needs to resign, Christie replied, "I don't know how you survive this one." (CBS News)

Will he be the next to go?