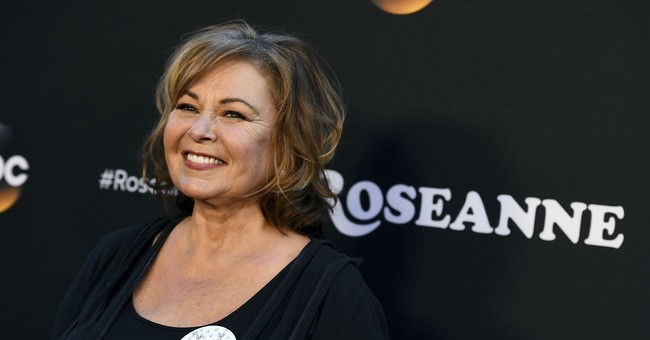 Over 18 million people tuned in for the premiere of the "Roseanne" reboot Tuesday night on ABC. President Trump, who knows a thing or two about ratings, having hosted the popular "The Apprentice" on NBC for years, called the star's show to congratulate her.

Roseanne Barr's character on the show is a bold Trump supporter, as is the star in real life. Even before she was thanking the president for "Making America Great Again" or calling Hillary Clinton "liar, liar pants on fire" on the sitcom, Barr was standing up for Trump on Twitter and multiple talk shows. Just last week, she sparred with Jimmy Kimmel, telling him to "zip his f***ing lip" and let her defend the president.

Trump, obviously thankful for Barr's minority voice in Hollywood, told her Wednesday how "happy" he was for her successful show, according to the actress.

"It was pretty exciting, I'll tell you that, they said, 'Hold please for the President of the United States of America' and that was about the most exciting thing ever and it was very sweet of him to congratulate us," Barr said.

"We talked about a lot of things, he is just happy for me," she continued. "I have known him for many years and he has done a lot of nice things for me over the years and it was just a friendly conversation about work and television and ratings." (NBC News)

Wow amazing. Congrats @therealroseanne. If you’re not too busy already maybe work in a late night show too... seems there’s some demand for an alternate viewpoint. #Rosanne https://t.co/JNaLjxS0fs

Judging by ratings, the "Roseanne" reboot was clearly the most popular of the past year's resurrected TV shows. The original "Roseanne" aired on ABC from 1988 to 1997.