Holder: Mueller Is Just Trying to Make His Case Against Trump Juicier 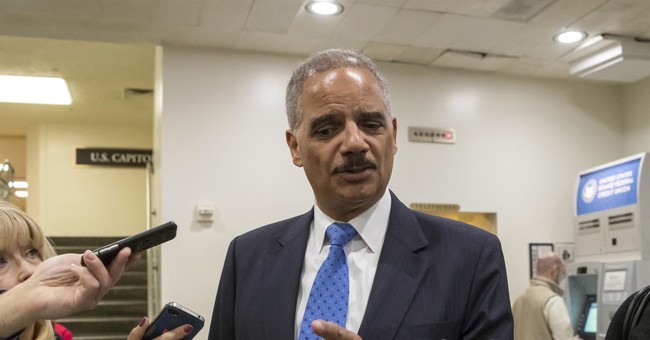 Eric Holder, former attorney general for President Obama, predicts that special counsel Robert Mueller already has an obstruction of justice case against President Trump and that he is stalling so he can make it as juicy as he can and bring it before a grand jury.

"Well I think that you technically have an obstruction of justice case that already exists," Holder said on "Real Time with Bill Maher" Friday. "I've known Bob Mueller for 20, 30 years. My guess is, he's just trying to make the case as good as he possibly can."

The Mueller investigation has produced several indictments so far. The first came down against former Trump campaign manager Paul Manafort and his business associate Rick Gates, who were charged with money laundering and conspiracy against the United States. The next indictments came against former Trump campaign foreign policy adviser George Papadopoulos and national security advisor Michael Flynn. Last month, Mueller also charged 13 Russian nationals for interfering in our elections, with a 37-page report detailing how the defendants posed as grassroots political activists advocating for and against Donald Trump and Hillary Clinton. Three Russian companies, one California man, and one London-based lawyer have also been charged in the Mueller probe.

None of the indictments, however, have charged Trump and his associates of colluding with Russia.

Still, Holder charged that the president has not properly addressed the Russian conspiracy. He has "done nothing to prepare us for what is to come" and he's been "derelict in his duties," the former attorney general maintained.

The scandal may very well derail his re-election efforts, both he and Maher suggested, especially if Democrats start throwing around the word "treason."

The Mueller investigation has been complicated by a controversial memo released by Republicans on the House Intelligence Committee detailing FISA abuses at the FBI. Trump said that the document, which claims that the agency spied on members of his campaign, "vindicates" his team from wrongdoing.