Schiff: Bannon Will Probably Be Held in Contempt of Congress 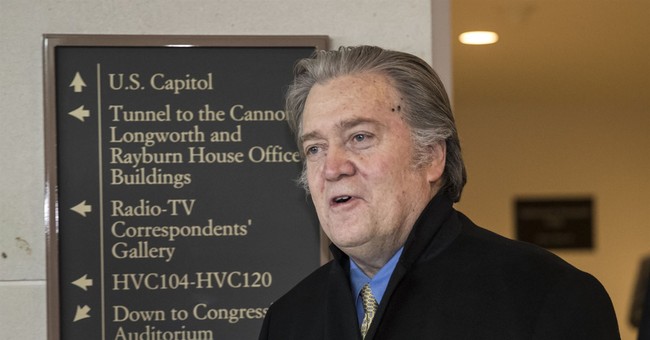 Rep. Adam Schiff (D-CA), the ranking member on the House Intelligence Committee, said that former White House Chief Strategist Stephen Bannon will likely be held in contempt of Congress for refusing to cooperate with them.

He has refused to answer several questions about the investigation into Russian collusion, Schiff said.

"I think it's likely that he will face a contempt citation," Schiff said Thursday at a Council on Foreign Relations event.

Instead of offering information, Bannon has been citing executive privilege on behalf of President Trump.

“The only questions he would answer were questions that had been scripted, literally scripted for him by the White House,” Schiff said. “Whenever we sought to probe anything beyond the four corners of the specific wording of the question, he refused to answer. That’s not how executive privilege works.”

The "stonewalling," Schiff said, will only go so far.

Bannon has also been meeting with special counsel Robert Mueller over the past week.

Schiff and other Democrats on the Intelligence Committee are currently trying to get their rebuttal to the Republican FISA memo declassified. The Republican-authored document released a couple weeks ago is four pages long and explains how the FBI abused FISA rules to spy on members of the Trump campaign during the 2016 presidential election. The Democrats allege that the memo omits key context intended to undermine the intelligence agency. Their rebuttal is six pages longer and includes those important details, they explain.

Yet, after a review, Trump decided not to release it. He cited national security concerns and wants them to make some revisions and redactions.

Schiff said no revisions will be made, but he's confident they can reach a compromise.