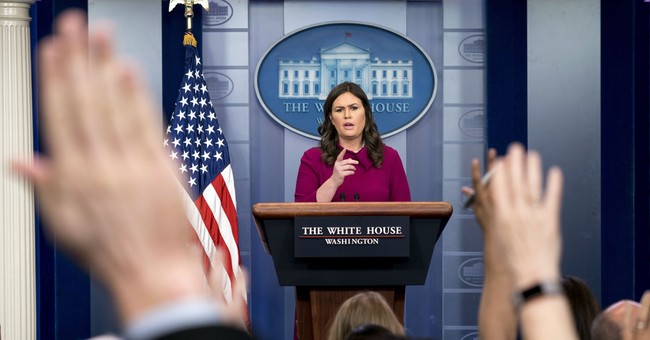 White House Press Secretary Sarah Huckabee Sanders was grilled at her Monday briefing about the recent White House resignations. Both staff aide Rob Porter and speechwriter David Sorenson left their posts in light of domestic abuse charges. How did the White House allow them to continue serving for so long with these skeletons in the closet?

In the midst of the interrogation, Huckabee Sanders tried to turn the tables on the press.

How "can you say you're keeping classified information safe" with all these people who the FBI rejected for a permanent security clearance? one reporter asked.

"You want to talk about national security leaks?" she said. "Look around the room."

The press noted that doesn't answer why the White House kept Porter around after his two ex-wives told the FBI that he abused them. One of his ex-wives, Colbie Holderness, even had a grisly photograph of her black eye. White House Chief of Staff John Kelly, while aware that Porter was not able to obtain a permanent security clearance, said he didn't know until recently the allegations against him were so severe. As for Sorenson, his ex-wife has a long list of the ordeal she said he put her through, including him running a car over her foot, putting out a cigarette on her hand, and throwing her against a wall.

Other reporters wanted to know, though, why Trump wished Porter well a few days ago, to which she replied, "He hopes the best for all American citizens."

The Washington Post was not satisfied with the press secretary's answers and sarcastically likened her briefing to a piece of "amazing spin."