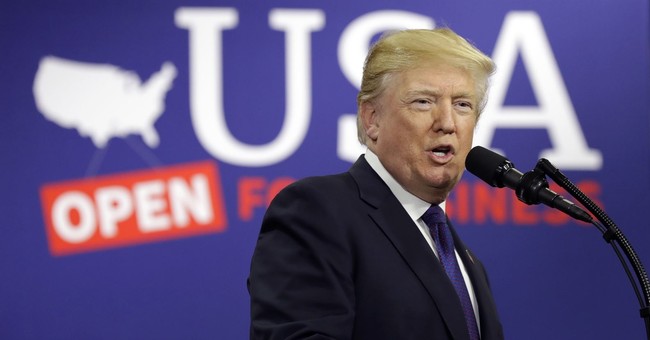 During a speech touting the Republican-led Tax Cuts and Jobs Act in Blue Ash, Ohio Monday, President Trump railed against Democrats for being dead silent during his State of the Union address.

Even when he was sharing positive, bipartisan news on the economy, Trump looked over at the Democrats and saw few smiles. It was “very selfish” for the Democrats to want him to fail than to have the country succeed, the president said.

Trump particularly confused as to why, when he touted African-American unemployment, which is reportedly at its lowest rate in history, the Congressional Black Caucus remained stone faced and seated. Well, except for one person.

Trump did not know who the lawmaker was, but he recalls he at least "put his hands together" when he mentioned the positive employment statistic.

“He was probably severely reprimanded” for the golf clap, Trump suggested.

It got to the point where Trump stopped even looking at the Democratic side.

“It was bad energy,” he recalled. Even on positive news, “they were like death and un-American.”

The president specifically reprimanded House Minority Leader Nancy Pelosi for calling the bonuses that are being given out in response to tax reform as mere "crumbs." That comment, he predicted, will have as much of an impact as Hillary Clinton's dismissive "deplorable" comments during the 2016 presidential election.

Pelosi, he said, is the Republicans' "secret weapon."

He predicted that the GOP will do "incredibly well" in the 2018 midterms.

During his speech, Trump offered a few employees the stage to explain how they are going to use the money they saved from tax reform.