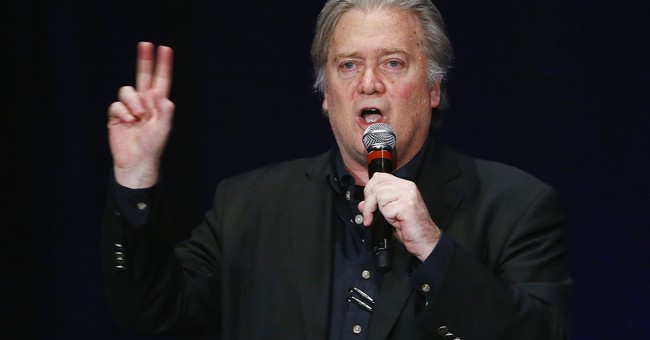 You may recall how the media jumped all over the report that Donald Trump Jr. had met with a Russian lawyer who told the Trump campaign she may have incriminating information on Democratic presidential candidate Hillary Clinton. It didn't exactly raise red flags for Trump Jr., who was open to the meeting, writing "I love it" in an email. We now know that no significant intel came from the meeting, but it sure didn't look good that he was so eager to talk to her. Not to mention, it offered some credence to the claims that the Trump campaign was colluding with the Kremlin.

Former White House Chief Strategist Stephen Bannon went off on Trump Jr. and the other Trump associates who thought it was a good idea to sit down with the Russian lawyer in Trump Tower instead of, you know, alerting the authorities. He sounded off in author Michael Wolff's new book, "Fire and Fury: Inside the Trump White House." (Strong language)

“Even if you thought that this was not treasonous, or unpatriotic, or bad shit, and I happen to think it’s all of that, you should have called the FBI immediately.”

Bannon went on, Wolff writes, to say that if any such meeting had to take place, it should have been set up “in a Holiday Inn in Manchester, New Hampshire, with your lawyers who meet with these people”. Any information, he said, could then be “dump[ed] … down to Breitbart or something like that, or maybe some other more legitimate publication”.

Bannon added: “You never see it, you never know it, because you don’t need to … But that’s the brain trust that they had.” (The Guardian)

A CNN panel was handed the above excerpts as soon as they came on air and read it with shocked faces. Anchors John Berman and Poppy Harlow apologized repeatedly to their audience for being caught off guard. Did Bannon really say that? was the gist of it.

Yet, it perhaps shouldn't be that much of a surprise, considering how Bannon has distanced himself from the Trump family in the recent past. When Bannon was campaigning for Alabama Senate candidate Roy Moore last month, he spurned Ivanka Trump for refusing to support Moore by using her own words against her.