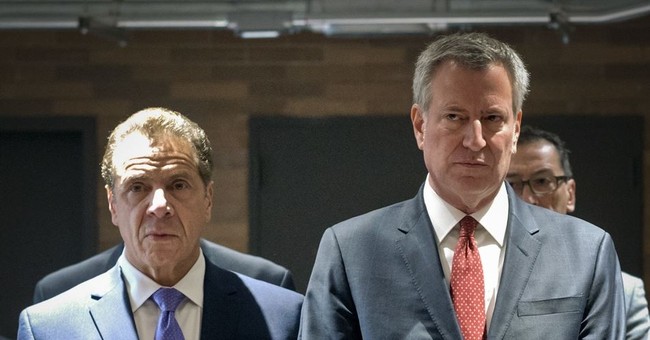 New York's governor, mayor and police force briefed the press Monday after a terrorist tried and failed to blow up subway riders at the Times Square subway station. The suspect, Akyed Ullah, a 27-year-old man from Bangladesh, failed to properly detonate the pipe bomb that was strapped to his body. Instead of mass casualties, three people sustained minor injuries.

“We are an international target,” Gov. Andrew Cuomo acknowledged at the press conference, before condemning the attacker.

"Anyone can download garbage and vileness on how to put together an amateur level explosive device."

Both Cuomo and De Blasio praised New Yorkers and those who have sworn to protect them, including the NYPD, and first responders.

“We have the best law enforcement on the globe,” the governor said.

The mayor and the governor also noted the effectiveness of the See Something Say Something policy.

Every day New Yorkers who see something that doesn’t make sense should tell a police officer, De Blasio instructed. "They are the ones who can take the information and act on it."

"We show that democracy can work and our enemies want to undermine that," he intoned.

The mayor noted there are no additional known incidents at this time and New Yorkers are going to go back to work.

"This is the most resilient place on earth," he concluded.