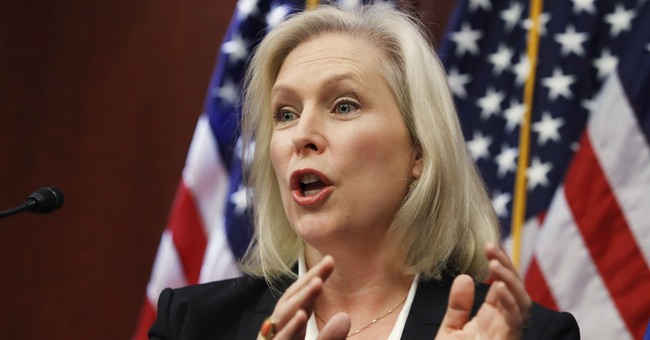 Three of President Trump's female accusers spoke with NBC's Megyn Kelly Monday about their experiences, all claiming he took advantage of them sexually. Former beauty pageant contestant Samntha Holvey alleged that Trump made her feel like "a piece of meat," Rachel Crooks, a former receptionist, claimed he forcibly kissed her, and Jessica Leeds, a traveling saleswoman, says he groped and kissed her on an airplane. The White House has dismissed them as "false claims," as Kelly reiterated on her show.

These women's stories, however, were enough to convince Sen. Kirsten Gillibrand (D-NY) that the president needs to step down "immediately." Should Trump resist those calls, Gillibrand is prepared to call for congressional hearings.

"I think he should immediately resign, and if he doesn't, we should have the investigation," she said, calling the allegations "credible."

Three of her colleagues, Sens. Cory Booker (D-NJ), Bernie Sanders (I-VT) and Jeff Merkley (D-OR), agree Trump needs to go. His crimes, they argue, are equal to or worse than those that derailed their colleague Al Franken's career.

"I just watched Senator Al Franken do the honorable thing and resign from his office," Booker said. "My question is, why isn't Donald Trump doing the same thing - who has more serious allegations against him, with more women who have come forward. The fact pattern on him is far more damning than the fact pattern on Al Franken."

House Democrats are just as busy in their quest to get Trump out of office. A whopping 58 representatives voted for a debate on the articles of impeachment introduced by Rep. Al Green (D-TX), but it ultimately failed. In the articles, Green described Trump as a bigot who is "unfit" to serve.

Democratic leaders like Nancy Pelosi are trying to tamp down such efforts - at least for now.

"Now is not the time," she and Minority Whip Steny Hoyer told their fellow Democrats last week.