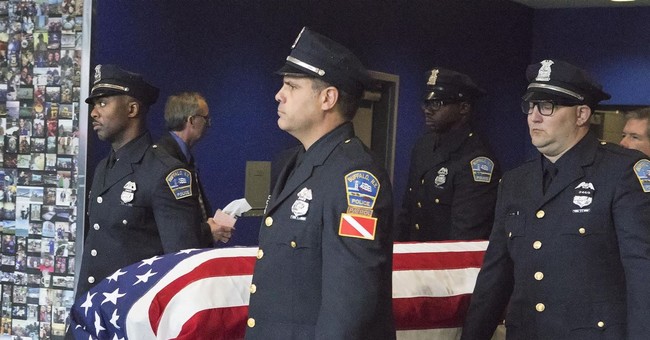 The Buffalo community has been mourning late police driver Craig Lehner since he died during a training exercise with the Underwater Recovery Team in the Niagara River earlier this month. He was only 34.

In addition to being a police driver, Lehrer was a K-9 handler, an emergency driver, and he served as a military policeman with the National Guard in Iraq.

It's no wonder his friends called him "Superman."

The fallen superhero was given a funeral ceremony at KeyBank Center, with upwards of 7,000 people in attendance. The Peace Bridge and the City Hall dome were lit up blue.

Communities like Saranac, NY are showing their appreciation for all the police do with some moving gestures.

Blue ribbons now adorn many of the lamp posts in front of Saranac’s well-kept homes.

“It’s just a way of letting the police know we appreciate and understand,” Gregory said.

Neighbors also are talking about establishing a local dog park in honor of Lehner and his K-9 partner, Shield, he said.

Similar sentiments occurred Friday at Makowski School 99 on Jefferson Avenue.  Students there made cards to show support for the Police Department and Lehner family. They also crafted a special basket that will be presented to officers Monday morning.

Buffalo's sports teams are paying tribute to Lehner as well. On the ice, the Buffalo Sabres stood for a moment of silence. On the field, the Buffalo Bills honored Lehner at their game against the Oakland Raiders Sunday. The team brought Lehner's police dog Shield to the game and presented his family with a game ball.

.@WGRZ BPD officer Craig Lehner was honored at the Bills game today. His family received a game ball as a token of appreciation. pic.twitter.com/NMn2PWB5DB

The Bills gesture was especially significant, considering how some of the players angered fans by kneeling during the national anthem. One player, LeSean McCoy, even decided to work on his stretches while the stadium honored Old Glory. McCoy, like many NFLers that weekend, said his protest was in direct response to President Trump's calling kneeling football players SOBs.

This controversial context made Sunday's tribute to Officer Lehner all the more important.

Sadly, other teams continue to cause distractions during moments that are supposed to be dedicated to the flag.