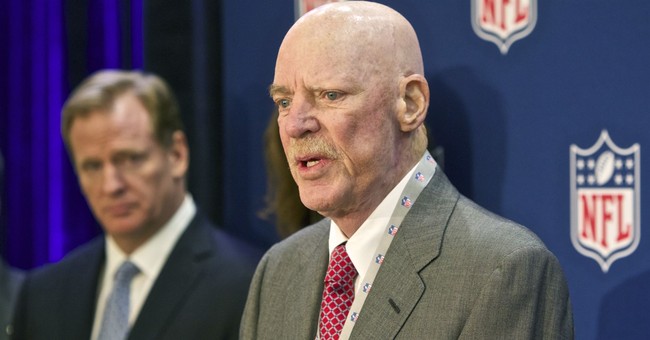 Despite President Trump railing against NFL players who kneel during the national anthem, the protests continue and have now stretched into their eighth week this season.

On Sunday, the majority of players on the Houston Texans knelt and linked arms during The Star-Spangled Banner before the game against the Seattle Seahawks. Only 10 players stood.

The widespread protest by the players was largely due to team owner Bob McNair's recent comment that “we can’t have the inmates running the prison,” in reference to kneeling during the national anthem. He later apologized for the remark.

"[There were] a lot of emotions running through our team," left tackle Duane Brown said, reports ESPN. "But just a huge sense of unity, I think we all felt, just coming out and playing for each other. And that was it. Forgetting everything else. Once kickoff started, we tried to block out any other distractions we may have had and try and go to work."

He continued: "I'm never going to force anybody to do anything that they don't feel comfortable with. I think we all felt the same way on Friday. And as far as the demonstration went, some people didn't feel quite comfortable doing it, some people did. But we all supported each other, and that was what was important. I don't think anyone looks at anyone differently for what they stood for or didn't stand for."

But the Texans weren’t the only ones in the NFL to protest Sunday.

Six players protested during the game between the Philadelphia Eagles and the San Francisco 49ers, and one San Diego Chargers player raised his fist in the air during the national anthem.