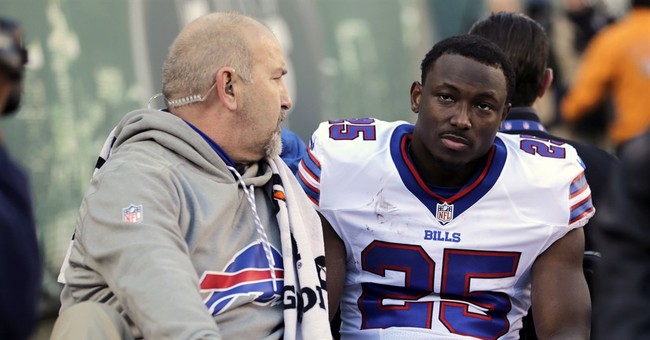 Over 150 football players took a knee or remained in the locker room Sunday during the playing of the national anthem at NFL games across the country. Their choice to ignore the anthem came after President Trump called Colin Kaepernick an SOB for starting the controversial action to protest racial injustice.

One Pittsburgh Steeler player actually stood for the anthem, only to later apologize to his teammates and franchise.

As a Buffalo Bills fan, I had hoped at least they would remain standing for our law enforcement, as they've done in the past during the kneeling controversy. However, I was very mistaken. Not only did several of the players kneel, one player took it a few shameful steps further.

Asked about his stretches after the game, the running back explained that he cares about the flag, but not our "jerk" of a president.

Well, former Bills player and NFL Hall of Famer Jim Kelly was having none of it. While he "likes" McCoy, Kelly "100 percent" disagrees with his behavior.

"You want to kneel? Fine. But when you go and do what he did yesterday, that sort of bummed me out. And I lost a lot of respect for him. ... You want to kneel? That's your prerogative. I would never do that. I will always stand, thank the good Lord for everything I got. But when you disrespect the way he did and just go by his everyday duty in the national anthem being sung? Uh-uh. I won't go for that."

It's especially a shame that McCoy acted as he did over the weekend, considering the moving gesture he made last year. In the heat of Kaepernick's protest, McCoy invited over a dozen local police officers to a Bills game for recognition.

“Just an appreciation type of thing,” McCoy said at the time. “Cause they’re taking so much heat right now. There’s things that are happening that’s definitely wrong but I just feel like there’s bad people, there’s bad cops and there’s good cops.”

Fast forward a year later, and the running back is doing leg stretches during the anthem.

The Bills may have won the battle on the field Sunday against the Broncos, but they lost plenty of respect.

One stadium employee, Erich Nikischer, was so upset over the Bills behavior that he quit his job at New Era Field after 30 years.

“I waited until the National Anthem ended, I took off my shirt, threw my Bills hat on the ground, walked out,” he said.