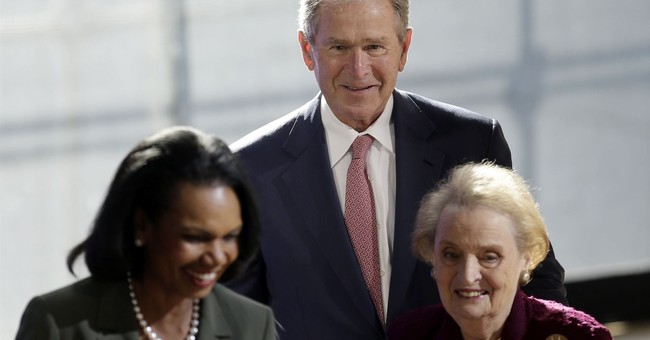 My what a difference eight years makes. I still have very vivid memories of my liberal classmates and professors trashing President George W. Bush in high school. They blamed him for everything. He was the "worst president" in history. By October 2008, he had a dismal 25 percent approval rating.

Now, a majority of Democrats are fond of him, according to new polling.

A few factors can explain this impressive turnaround, including his relatively quiet retirement.

Bush has largely stayed out of the spotlight since leaving office, refusing to criticize his successor President Obama. By way of explanation, 43 explained that he does not feel right criticizing a sitting president.

"I don't think it's good for the country to have a former president undermine a current president," he told Sean Hannity in 2014. "I think it's bad for the presidency for that matter."

Whenever the Bushes were seen in public with the Obamas, the families were very friendly, resulting in a now famous photo of Mrs. Obama warmly hugging Bush at the opening ceremony for the Smithsonian National Museum of African American History and Culture.

Those who praise Bush for playing nice with Obama may be the same people cheering when he makes a speech that appears to condemn President Trump.

In a speech at the "Spirit of Liberty: At Home, In The World" event in New York, Bush reiterated America's true identity and condemned white nationalism.

"This means people of every race, ethnicity and religion can be fully and equally American," he said. "It means that bigotry or white supremacy in any form is blasphemy against the American creed. It means the very identity of our nation depends on the passing of civic ideals to the next generation."

The former president's remarks were widely interpreted as a critique of President Trump's policies. Many others reject that analysis, but you can see why Democrats would be more keen on Bush believing he was openly rebuking 45.

Add his charming personality into the mix, and it's not hard to see why President Bush's popularity is climbing.