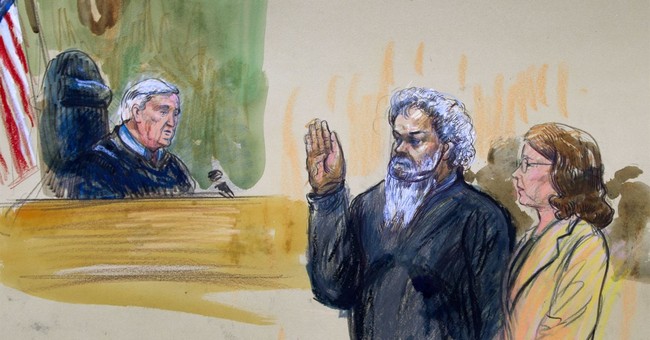 The first day of trials for Abu Khattala, the suspected author of the Benghazi, Libya terror attack in 2012, begins Monday in Washington, D.C. He faces an 18-count indictment and stands by his not guilty plea.

His suspected crimes are described below.

Mr. Khattala, the only person to be prosecuted in relation to the attacks, was charged with crimes including murder of an officer of the United States and conspiracy to provide material support to terrorists. Officials said Mr. Khattala, 46, was a local leader of an Islamist extremist militia who sought to carry out the attack because he believed the mission was being used to collect intelligence and he viewed the U.S. actions as illegal. He told a group of others about the mission, which the group breached in a violent attack and set fire to it.

In his opening statement on behalf of Khattala, defense attorney Jeffrey D. Robinson said they've got the wrong guy.

Khattala is "simply someone who can be blamed because someone has to be blamed for this tragedy," says defense attorney. #Benghazi https://t.co/Aq0GcjC91o

Four Americans died in the Benghazi raid on September 11, 2012, including U.S. Ambassador Chris Stevens, U.S. information management officer Sean Smith, and security officers Tyrone Woods and Glen Doherty. The Obama administration initially told us that the attack, which occurred just days before the 2012 presidential election, was a spontaneous reaction to an offensive YouTube video. We have since learned that the attack was a very coordinated, long planned effort.

As other outlets have noted, Monday’s trial will test the effectiveness of trying terrorists in civilian court instead of military tribunals. President Trump prefers suspected terrorists to be tried on Guantanamo Bay. Both he and Attorney General Jeff Sessions want to keep the facility open for business.