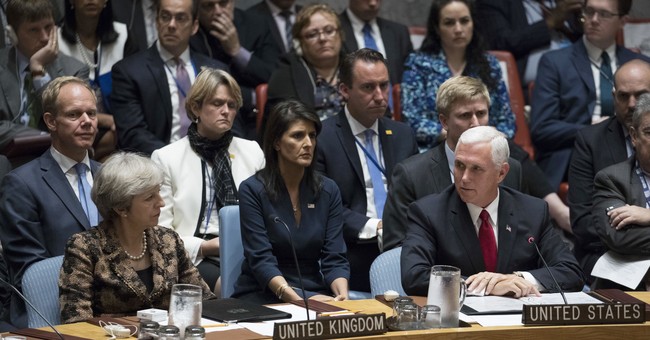 The Trump administration refuses to soften its rhetoric at the United Nations General Assembly in the face of media criticism. President Trump delivered one of the strongest rebukes of North Korea, Iran, Venezuela and their corrupt leadership.

Now, Vice President Mike Pence is not wasting the opportunity to challenge the UN on what the White House views as an anti-Israel agenda. He was particularly upset with the UN Human Rights Council.

"I think of what President John F. Kennedy warned more than 50 years ago: that the U.N. must not become, in his words, ‘a forum for invective,'" Pence said in his remarks. "Unfortunately, today, the Human Rights Council has become exactly that – particularly, the Human Rights Council has become a forum for anti-Semitism and invective against Israel."

Pence had evidence to corroborate his claims. Why, for instance, has the council adopted dozens of resolutions that are critical of Israel, while largely ignoring horrid human rights violators? To put it in perspective, the UNHRC has condemned Israel with 78 resolutions. In comparison, they have given 29 to Syria, nine to North Korea, and six to Iran. In March, the Trump administration boycotted the UNHRC because of its anti-Israel stance.

The vice president demanded the council enact reforms, starting by removing from its panel representatives of repressive regimes.

The administration's tough talk is working, according to UN ambassador Nikki Haley. In an interview with Good Morning America Wednesday, she informed the anchors that Trump's rhetoric is waking up the international community - especially in regards to the threat of Kim Jong Un.

"Every other international community is now referring to him as 'Rocket Man,'" Haley said.