Stephen King Trashes Trump For Having an 'F***ed Up Mind' 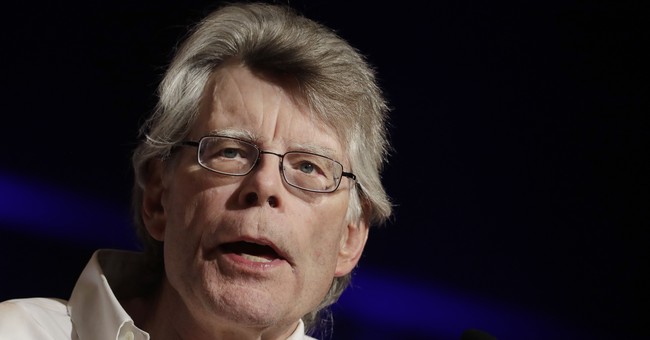 Stephen King's terrifying novel "It" was recently released as a feature film. The main character is a clown called Pennywise who apparently eats kids (I learned this on Twitter.) Some of King's other stories include "Carrie," which is about a bullied girl in high school who uses telekinetic powers to get revenge on her classmates, and "The Shining," a haunted hotel in which a possessed man named Jack tries to kill his family.

Messed up right? Well, the author of the above plot lines thinks that Donald Trump's mind is even scarier. King was reacting Sunday to a satirical video the president retweeted that showed him hitting Hillary Clinton with a golf ball. (Warning: graphic language.)

Trump thinks hitting a woman with a golf ball and knocking her down is funny. Myself, I think it indicates a severely fucked-up mind.

The reactions were as you'd expect. Some agreed with King's description, while others pointed out King's own unusual imagination.

Dude, at the end of "It" you have a bunch of 11-year-old boys have sex with one 11-year-old girl https://t.co/rhOYHp3GDr

I mean, I don't like Trump's tweet at all. But Stephen King of all people shouldn't complain about debased cultural expression.

As The Hill noted, King has a history of questioning Trump's mental health.

"He's an almost textbook case of narcissistic personality disorder," the novelist said, after looking at the president's Twitter page.

Not a fan of violence, but aren't golf balls less threatening than kid-eating clowns?