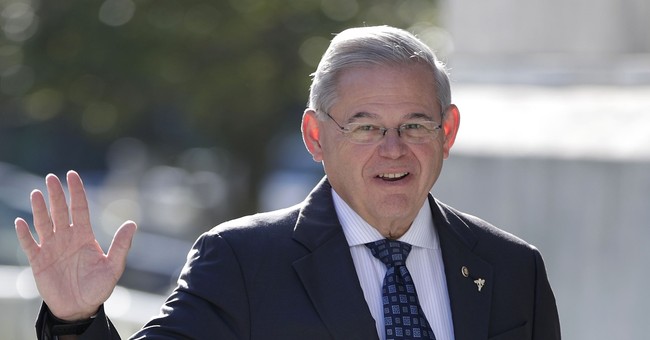 Since the mainstream media has had little interest in Sen. Bob Menendez's (D-NJ) corruption trial, America Rising PAC has launched a new website where concerned citizens can inform themselves. Menendez is on trail for eight counts of bribery, three counts of honest services fraud, one count of conspiracy, one count of violating the Travel Act, and one count of making false statements, the group explains.

Entitled, "How Many Votes Has Sen. Bob Menendez Missed While on Trial for Corruption?," the site tracks how Menendez's absence is affecting policy. As the PAC explains, his trial could not have come at a worse time for the Democratic Party, considering September is an especially busy month on Capitol Hill.

"Employers expect the people they hire to show up for work every day and do their job with integrity," the website reads. "By those measures, Senator Robert Menendez (D-NJ) is greatly failing his employer, New Jersey voters. As he sits in a Newark courtroom trying to defend himself against bribery charges, the Garden State is being robbed of one of its two Senate votes."

White House Counsel Kellyanne Conway mocked Menendez for his busy schedule, adding that his absence could be costly to Democrats and their agenda. For instance, if an important vote comes down to the wire at 49/49 vote, the vice president would serve as a tiebreaker. It's already happened a few times this term.

So, Menendez "actually affects the calculation on a number of these important votes," Conway said.

Legislation dealing with the federal debt limit, spending deals, and health care will all proceed without the New Jersey senator's input.