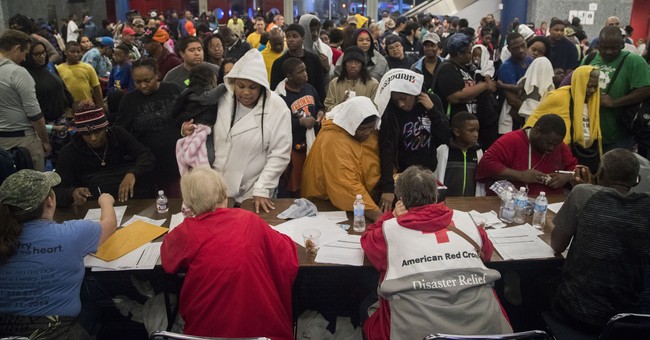 Rumors have been circulating that the city of Houston is demanding immigration papers from Hurricane Harvey victims who are hunkering down in the city shelters. The city's official Twitter account put that rumor to bed in very Trump-like fashion - caps lock, exclamation point and all.

We will not ask for immigration status or papers from anyone at any shelter. This rumor is FALSE!

Social media users like Texas Democrat confirmed the tweet, noting that in the two days they've volunteered at shelters, only basic contact information has been requested of victims.

I've been working at an area shelter for the last 2 days. I never say anyone asked for anything but basic contact information.

After several requests, the city of Houston also debunked the fake news in Spanish - caps lock and punctuation still intact.

On the same note, the ACLU and several progressive groups were incensed when they learned that the Customs and Border Protection in Texas were going to keep its checkpoints open during the storm. The agency explained that while they are sympathetic to anyone trying to escape disaster, they have a duty to law and order. Yet, the ACLU said the border patrol's "disgusting" decision was "putting undocumented people and mixed-status families at risk out of fear of deportations.”

Harvey has reportedly taken nine lives so far in its path of destruction. The massive flooding continues to displace thousands of citizens and emergency services are at capacity. According to experts, the state could take years to recover from the carnage.

You're in our prayers, Texas.