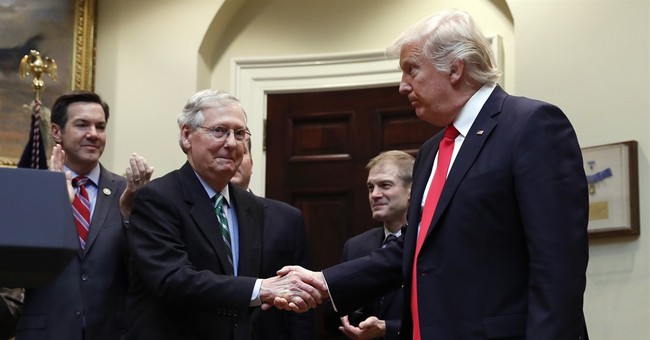 Under the leadership of McConnell, the GOP failed to follow through on its 7-year promise to repeal and replace Obamacare. Trump, along with about every conservative in America, was justifiably peeved. He let Congress know just how he felt via his Twitter page.

McConnell shot back at the president, telling him he had "excessive expectations." Again, Trump responded by pointing out Republicans had seven years to figure out health care.

It remains his No. 1 issue with the majority leader.

The only problem I have with Mitch McConnell is that, after hearing Repeal & Replace for 7 years, he failed!That should NEVER have happened!

Recent reports suggested that the two have not spoken in weeks. However, asked at today's briefing about the public bickering, Huckabee Sanders said Trump and McConnell still have "shared goals" and are ready to continue working together. The White House remains "disappointed," but they have to move forward.

"I think the relationships are fine," @SHSanders45 says of @POTUS and Senator Mitch McConnell. https://t.co/HS2waj5FN1 pic.twitter.com/qI4sf3yTPR

Speaking of more policy items, Huckabee Sanders ensured the press that Trump is still committed to building the border wall. He is currently "fighting for funding" to get it done. She also noted that a lot of Democrats have voted for a border fence in the past, and they hope to get at least some on board this time around.

At a speech in Phoenix, AZ this week, the president said he's going to get that wall built "if we have to close down our government."