Trump Sits Down With Pat Robertson, Explains Why We Need Relationship With Putin 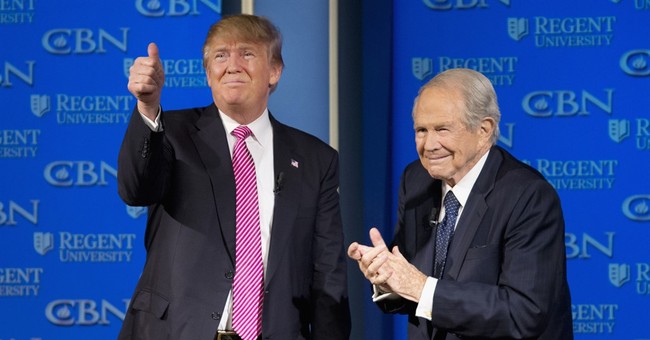 President Trump granted an interview to Christian Broadcasting Network Founder Pat Robertson this week, which is set to air in its entirety Thursday. Robertson, a former Republican presidential candidate, has for years hosted the faith-based program The 700 Club.

While you may have expected Robertson to ask Trump about religion and his faith-based initiatives, the two actually focused primarily on foreign policy. Trump is only a few days returned from his trip to the G-20 summit in Germany, where he met with Russian President Vladimir Putin for the first time. He told Robertson that while critics want him to have nothing to do with his Russian counterpart, it's important the two nations have a relationship. After all, they are two of the most powerful countries in the world.

A positive relationship between the U.S. and Russia is also imperative in helping to solve international crises, Trump continued. He used the current ceasefire in Syria as an example of the two working together successfully. While past attempts at ceasefires have failed, Trump credited the now four-day ceasefire to his strong deal with Putin.

"Those (previous) ceasefires haven't held at all. That's because President Putin and President Trump made the deal, and it's held. Now, I don't know what's going to happen. Maybe as we're speaking they start shooting again. But this has held unlike all of the other ceasefires that didn't mean anything."

Robertson of course had to ask about the rumors of Russian collusion that supposedly benefited the Trump campaign. Trump dismissed it as a falsehood, adding that Putin would have been much happier with Hillary Clinton in the White House, in part because she would have "decimated" the American military.

Trump's sit-down with Robertson comes two days after he invited a group of evangelical leaders to the White House. Pictures from the meeting show the leaders praying for the president.