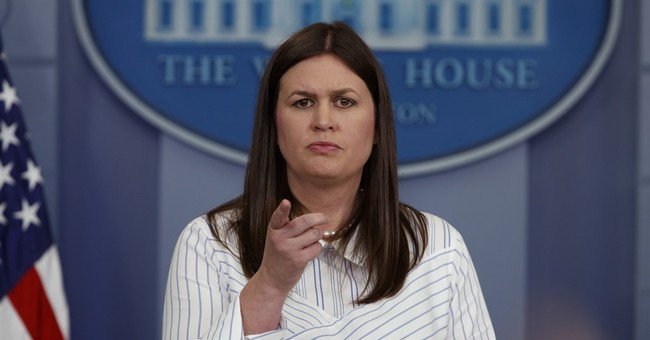 Deputy Press Secretary Sarah Huckabee Sanders defended President Trump’s controversial pair of tweets Thursday morning when he personally attacked “Morning Joe” anchors Joe Scarborough and Mika Brzezinski. In those early morning messages, Trump dismissed the MSNBC pair as unintelligent and even mocked Brzezinksi's appearance. Some top Republicans grimaced at the president's rhetoric. Yet, his defenders argue he was only firing back at a media that is constantly hammering him. For instance, on his program Scarborough has called Trump a "thug" and "the greatest liar" to ever reside in the White House.

“He’s not going to sit back and be attacked by the media,” Sanders said at the White House press briefing. “When he’s hit, he’s going to hit back harder.”

The president is simply pushing back at people who attack him day after day, she continued. “Where’s the outrage on that?” Furthermore, she said, she's been attacked by the news media multiple times, without a peep from the press.

One reporter did not like that response, insisting that the president has to be held to a higher standard than cable news media.

After being asked the same question in a myriad of ways, Sanders told the press that “the American people elected a fighter.”

The deputy press secretary also reasoned that Trump is not on Twitter 24/7 and has shown his priorities by his White House agenda. Why won't the media focus on Trump's many policy tweets about the economy, health care, etc.?

When asked what she would tell her kids about the president's Twitter insults, Sanders said that she would point them to God because “none of us are perfect."

Gavin Newsom Taken to the Legal Woodshed at SCOTUS. Again.
Townhall
'Ethnic studies' teacher training session warns them to be extra careful 'now that we're in people's homes' and parents might see it
Twitchy
Gaetz Turns it Around on CNN Journo After Network Exec Says Their Coverage of Him is "Propaganda"
Redstate
Biden's Team of Racists and Anti-Semites: An Anti-American Coalition in the Heart of the White House
PJ Media