NSA Director: I Was Never Directed By White House to Do Anything Inappropriate 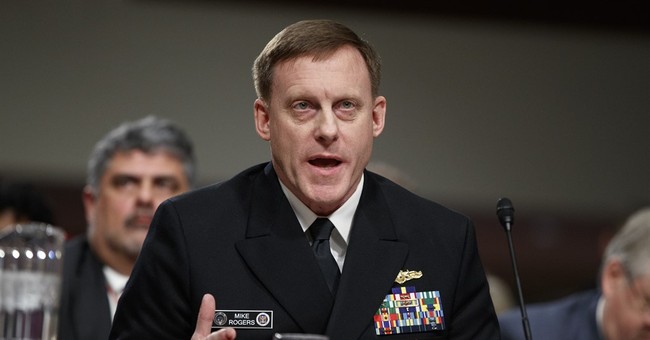 Sen. Mark Warner (D-VA) was very direct in his questioning for NSA Director Adm. Michael Rogers and Director of National Intelligence Dan Coats at Wednesday’s Senate Intelligence Committee hearing. The hearing was scheduled under the impression it would focus on the Foreign Intelligence Surveillance Act, yet lawmakers took advantage of another chance to grill the intelligence officials about the investigation into Russia's interference in the 2016 election.

Did President Trump ever ask Rogers to try to “downplay” the Russia investigation? Warner wondered.

The NSA director refused to relay any details about his private conversations with the president, but he could for certain offer the following assurance about his three years as NSA director.

NSA Dir. Rogers: "I have never been directed to do anything I believed to be illegal, immoral, unethical, or inappropriate." pic.twitter.com/m4O8Vwxdoj

Warner was disappointed by Rogers’ lackluster answer, and proceeded to ask Coats the same thing. He, too, was not very forthcoming. Yet, he also told the panel that he has “never” felt pressured by the Trump administration to interfere in an investigation.

FBI Director Andrew McCabe and Deputy Attorney General Rod Rosenstein are also being grilled by the Senate Intelligence panel, the latter of whom said he will absolutely not answer questions about the Russia probe.

It's Over: Senate Republicans Defeat Corrupt 'For the People Act'
Reagan McCarthy
Well, That’s Not the Retirement Message Some Employees Were Expecting from a Diversity Consultant Firm
Matt Vespa
Escape from New York: WSJ Hopes for City's Revival, But Zeroes in on the Candidate Who Must Lose At All Costs
Matt Vespa