Obama, Merkel Weigh in On 'Walls' 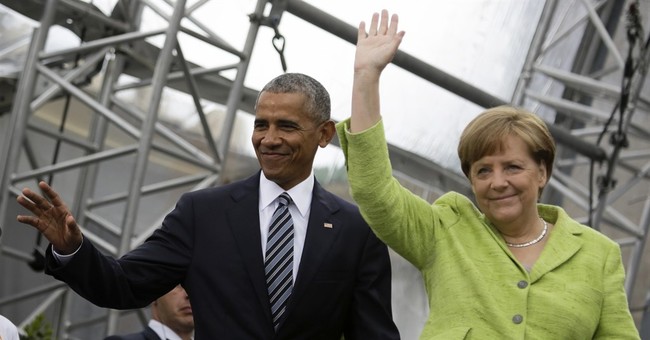 Former President Obama and current President Trump are both in Germany this week, but with much different messages on how to answer threats. Obama, appearing with German Chancellor Angela Merkel at a Protestant Festival Thursday, distanced himself from several of his successor’s policies. For instance, he spoke of the need to help foreign countries build, while Trump has proposed cutting foreign aid.

He also spoke out against walls.

“In this new world that we live in, we can’t isolate ourselves,” Obama said. “We can’t hide behind a wall.”

Merkel had the same perspective when she spoke at the NATO summit later in the day.

“It is not isolation and the building of walls that make us successful, but open societies,” Merkel says at NATO HQ https://t.co/B7NKuUMEnd pic.twitter.com/NQlAaPZCEX

Trump, we all know, is a huge fan of walls, more than once pointing to the Israeli security barrier on the West Bank as proof that structures help thwart terrorism. When it was his turn to speak at the North Atlantic Treaty Organization summit, he again called the terrorists behind the Manchester bombing "losers."  He also criticized his fellow NATO members for not paying their fair share of defense spending as they were standing right there listening to and watching him.