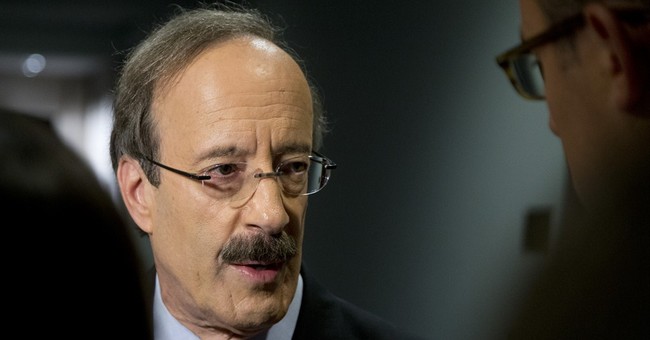 UPDATE: As expected, other Democrats are following suit and avoiding a meet and greet with the president tonight.

Rep. Sheila Jackson Lee (D-Texas) is reportedly undecided on where she will sit, but, according to a spokesperson, she won’t shake Trump’s hand, either. And Rep. Bill Pascrell (D-N.J.) told Fox News he doesn’t know where he will sit Tuesday night — but he knows where he won’t.

“I will not take an aisle seat,” he said. Pascrell explained that in the past he secured an aisle seat not for the camera time the spot comes with but to share a quick word with then-President Barack Obama that he otherwise wouldn’t have had the opportunity to say.

Rep. Eliot Engel is making history tonight. For the first time in nearly three decades, the Democrat from New York will be not sitting on the aisle to shake the president's hand as he gives his congressional address.

UPDATE: Dem Rep Eliot Engel just announced on the floor that for first time he WILL NOT sit on aisle to shake POTUS' hand when he enters

"I will listen to what he has to say today but I will not greet him and shake his hand," Engel explained.

Considering how dozens of Democrats skipped Trump's inauguration, expect others to follow Engel's lead on giving the president the cold shoulder on Tuesday.

Other Democrats in attendance will be making subtle protests against Trump's policy agenda by inviting DREAMers and refugees as their guests.