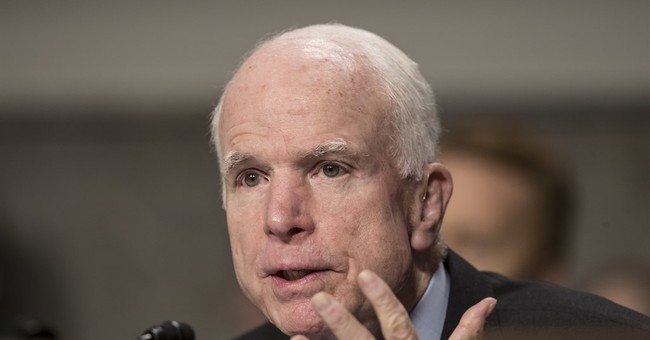 Sen. John McCain (R-AZ) appears to be doing some damage control after President Trump's "frank" phone call with Australian Prime Minister Malcolm Turnbull over the weekend. The two leaders were butting heads over a plan to resettle over 1,000 refugees in the U.S. Their discussion was apparently so heated that the two cut it about half an hour short.

After the call, Trump tweeted that he would be taking a look at the "dumb deal" President Obama made with Australia.

Sensing the think tension, McCain felt the need to phone Australia’s ambassador to the U.S., Joe Hockey, to express his "unwavering support for the U.S.-Australia alliance.” The senator shared a bit of their conversation in a statement on Thursday.

“I asked Ambassador Hockey to convey to the people of Australia that their American brothers and sisters value our historic alliance, honor the sacrifice of the Australians who have served and are serving by our side, and remain committed to the safer, freer, and better world that Australia does far more than its fair share to protect and promote,” McCain added.

How will Trump respond to McCain's taking matters into his own hands?