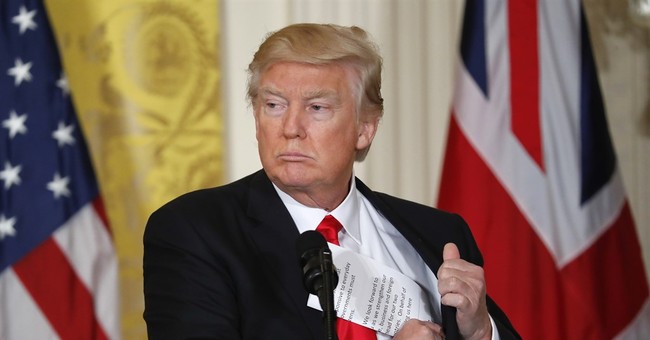 UPDATE: Trump's executive order does much more than just strengthen the vetting process.

President Trump finished his first week in office with one more executive order. His latest action mandates a more thorough vetting process for refugees wanting to come to the United States.

"I'm establishing new vetting measures to keep radical Islamic terrorists out of the United States of America,” Trump said at the Pentagon on Friday before signing on the dotted line.

“We are a compassionate nation and a country of immigrants," he said in a statement. "But as we know, terrorists are dead set on using our immigration and refugee programs as a Trojan Horse to attack us. Today, President Trump signed an order to help prevent jihadists from infiltrating the United States. With the stroke of a pen, he is doing more to shut down terrorist pathways into this country than the last Administration did in eight years. As Chairman of the Homeland Security Committee, I will ensure the appropriate steps are taken to tighten immigration and refugee screening. And in the long run, I will work with the White House to make sure the United States remains both a beacon of hope—open to all freedom-loving people—and a nation well-defended against all who wish to do it harm."

Trump also busy this week signing executive orders to begin construction on a U.S.-Mexico border wall and to vastly increase the number of border agents.

Project Veritas: Here's Why Fox Corp. Allegedly Muzzled One of Their Reporters
Townhall
NBC News assures us that despite viral images, it's mostly white people who are assaulting Asian Americans
Twitchy
Project Veritas Drops the Secret Recordings Made About Fox by Ivory Hecker
Redstate
[WATCH] Jon Stewart Tells the Truth About the Wuhan Virus and There's Nothing a Horrified Stephen Colbert Can Do to Stop Him
PJ Media