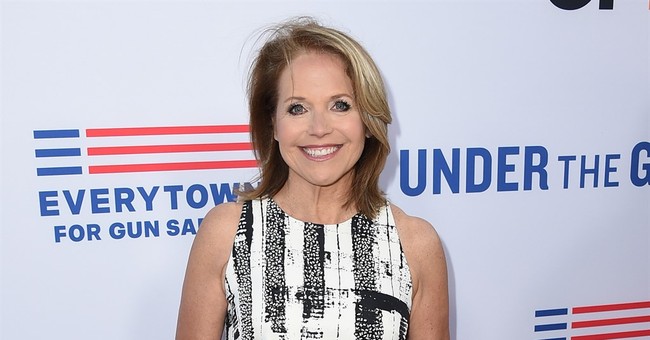 Earlier this year, Katie Couric and her producers were busted for editing a gun documentary to make a gun group look insensitive and ignorant. The group, The Virginia Citizens Defense League, sued her for $13 million for the manipulative editing.

In the scene under review, Couric is interviewing members of the VCDL and asks them, “If there are no background checks for gun purchasers, how do you prevent felons or terrorists from purchasing a gun?" Her question was followed by a long silence. In reality, however, the VCDP offered an answer immediately.

Couric apologized for the manipulation as the controversy was heating up, but this week she filed for a dismissal of the lawsuit.

"No reasonable viewer could interpret the film that way, because just before the exchange in question, the film explicitly depicted them explaining why they oppose background checks. Plaintiffs further assert that the film implies they are unfit to engage in business activities such as selling guns. Those alleged implications are equally strained. At worst, the film might be construed to imply that some members of the interview group had trouble coming up with an answer to the much narrower question about how, if there are no background checks, felons and terrorists can be prevented from buying guns. Defendants have never disputed that editorial choice may fairly be subject to criticism and debate, and indeed it has been. But whatever one thinks about the propriety of the edit, it simply does not rise to the level of defamation."

A Virginia federal judge will make the final decision.

"Under the Gun" was just another page in the liberal media's narrative on guns. They have no intention of portraying gun rights groups fairly. They are obsessed with gun control.